Accusations of massacres and continued fighting as Syria deadline looms 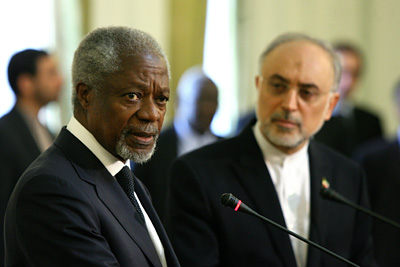 (PHOTO: The UN and Arab League envoy to Syria, Kofi Annan, has said he has received assurances from Damascus that it will respect his ceasefire plan, during a meeting with Iran Foreign Minister Ali-Akbar Salehi, April 11, 2012 in Tehran, Iran. He said there could be ‘improved conditions on the ground’ by Thursday morning, if all sides did so.)

Evidence emerged of a pair of mass executions in the city of Homs, underscoring how brutal the government’s crackdown had become in recent days, as it used the last few days ahead of the U.N.-sponsored cease-fire to try to overwhelm its foes. The 59 alleged victims of the executions were killed Monday, when the military sent ground troops into the neighborhood of Deir Balba after shelling it for a week, Syrian human rights activists said.

At least three pro-government militiamen were killed in the city of Hama on Wednesday, and the official news agency SANA said that seven members of the Syrian military killed by anti-government rebels were buried. The statement did say when they had died.

In a separate news item citing an unnamed “source at the Ministry of Defense,” SANA also reported that the Syrian military would abide by the cease-fire proposed by U.N. Syria envoy Kofi Annan and agreed to by Syrian President Bashar Assad last month. That item warned, however, that the military would respond if provoked by anti-Assad rebels.

Heavy shelling continued in Homs, the country’s third-largest city, which has been a main center of anti-Assad forces since last year.

Sami Ibrahim, who documents deaths for the London-based Syrian Observatory of Human Rights, said he’d interviewed a half-dozen witnesses to the executions of anti-Assad activists in Homs on Monday and that other members of his organization also had spoken to eyewitnesses.

“They told us they gathered them and made one grave for all and then they burned them. Among them were five women and five children,” Ibrahim said.

The alleged killings took place in two neighborhoods in Homs, where more than a half-dozen neighborhoods have been heavily shelled since February as the Syrian government has escalated its military campaign against the Free Syrian Army, the name widely adopted by the loosely organized and lightly armed army defectors and volunteers who have taken up arms against the government.

Many of Homs’ residents have fled, and on Wednesday, Ibrahim said shelling continued in three other of the city’s neighborhoods. Ibrahim said that he feared the result would be similar to what had transpired in Deir Balba for anyone who remained.

“They are shelling from outside the neighborhoods. When they want to enter they will enter. Almost all the people there are civilians,” he said. “There are also army defectors.”

Another activist, who used the pseudonym Abu Rami, said he was skeptical that the cease-fire would really take effect. “There are no signs that they will cease fire by tomorrow,” he said.

But if the shelling does stop, he said he believed it was likely that more victims of government violence would be found.

“Tomorrow we will know how many people really died,” he said Wednesday evening, less than 12 hours before the 6 a.m. cease-fire deadline. “Right now it is impossible to know, because they are still shelling Deir Balba.”

Abu Rami predicted massive demonstrations against Assad’s government if the threat of violence against demonstrators was indeed lifted.

“When the Syrian government will cease fire, I think you will see the millions of people who will go down to the street in huge demonstrations calling for Assad to leave and let the Syrian people choose their destiny,” he said.

Shelling was also reported in the town of Zabadani, west of the capital of Damascus. The Syrian military retook Zabadani from the Free Syrian Army in February.

Early Wednesday morning, the Syrian military again fired across the border into a refugee camp in Turkey, killing one Syrian. The incident was the second of its kind in three days.

Syrian activists say nearly 11,000 civilians and members of the Syrian military and security forces have been killed since March 2011. The government has said the rebels have killed more than 3,000 soldiers, police and civilians. It’s unclear whether those deaths are in addition to those the anti-government activists reported or whether there’s overlap.

Tens of thousands of Syrians have fled to Lebanon, Turkey, Iraq and Jordan, and the U.N. estimated last month that about 250,000 Syrians had been displaced inside the country.