At Illinois high school, fears of a ‘suicide cluster’ 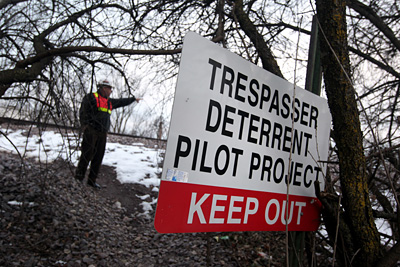 CHICAGO — The morning Lake Forest High School freshman Will Laskero-Teskoski died, his mother had tried desperately to get him to talk as she drove him to school. His grades had slipped, he’d seemed distant, and now he was hardly speaking to her.

(PHOTO: Rail safety specialist Chip Pew investigates along a track in Lake Forest, Illinois, where William Laskero-Teskoski was struck and killed by a train in February 2012. His mother feels it was not an accident but suicide. )

“I told him I loved him and that everything would be OK,” said Gina Laskero, who shared custody of her son.

She dropped him off, but the teen never went to class. Less than 30 minutes later, on Feb. 28, Laskero-Teskoski, 15, was struck and killed by a train in what his mother said she firmly believes was a suicide.

Laskero-Teskoski became the second of three Lake Forest High School students who were fatally struck by trains since January. Sophomore Farid Hussain, 15, walked in front of a Metra train on Jan. 9 in what the Lake County coroner ruled a suicide. Two weeks ago, as classmates began spring break, senior Edward Schutt, 18, became the third to be killed by a train.

No official cause-of-death rulings have been made for Laskero-Teskoski and Schutt.

But mental health experts and officials from other schools that have dealt with multiple student deaths say Lake Forest may be dealing with a suicide cluster. Within days of the second death, suicide prevention advocates began calling Lake Forest school officials, offering condolences and education tips.

The grouping of teen deaths may serve as a wake-up call to strengthen mental health support in a community rich with resources but reeling from the turn of events. Where multiple suicides have occurred, it often falls to school officials to lead prevention efforts with screening and education. Most teen suicides are not the result of a reckless impulse but a deliberate decision resulting from mental health struggles, experts say.

The second student death this winter brought swift action at Lake Forest High, where officials formed a task force of school and community leaders, police and parents. The group is reaching out to local and national school administrators for advice.

“Parents come together after a crisis,” said Stephanie Weber, executive director of Batavia-based Suicide Prevention Services of America. “This is that time, unfortunately, when people are receptive.”

While relatively unusual, suicide clusters occur in all types of communities. Barrington High School experienced five suicides over three years starting in 2007. Multiple youth suicides over short time frames have also been reported in St. Charles, Naperville and Elgin over the past decade, leaving community members bewildered, frustrated and scared.

“The reality is that suicide knows no particular demographic,” said Ted Testa, a psychologist and director of Lake County’s behavioral health department, who has revived a countywide task force on suicide prevention.

Adolescence “is a difficult time. People are seeking their own identity,” Testa said. “There’s lots of peer pressure and bullying. It’s very difficult for adolescents these days to not be exposed to that stuff.”

Barrington High Principal Steve McWilliams said the school sought to go “beyond the textbook and standards” to look at “what are we doing to help students mature, (and) understand one another.”

Nationwide, suicide is the third leading cause of death among people 15 to 24, according to the Centers for Disease Control and Prevention. And experts say clusters are seen among teens more than any other age group.

One expert said a teen suicide can sometimes cause a ripple effect. Those who take their own lives are often aware of methods used by others, increasingly so as students communicate through social media, said Scott Poland, a past prevention-division director for the American Association of Suicidology.

When teens who are already struggling with mental illness learn that a peer has taken his own life, “they feel that they could take the step themselves,” he said.