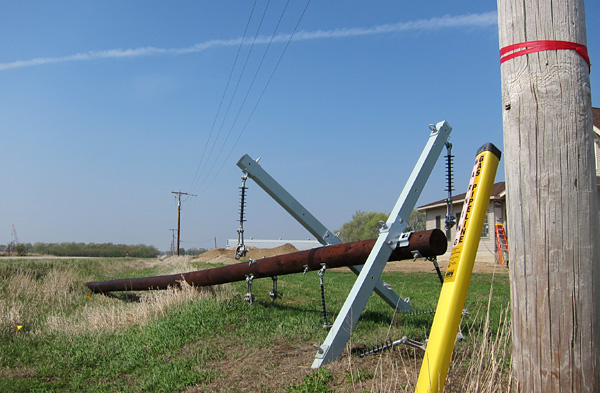 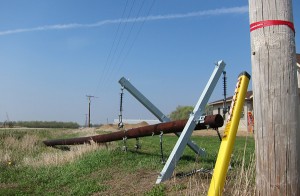 MASON CITY, Iowa – April 2, 2012 – Interstate Power and Light Company (IPL), an Alliant Energy company, is working on another Power Iowa project in Worth County which will enhance the safety and increase the reliability for residents of Hanlontown and Fertile.

(PHOTO: A new Alliant Energy power pole rests next to a pole ready to be removed, on the south side of Hanlontown, Iowa, on April 2, 2012.  New poles have already been installed along 6th Street.)

Alliant Energy crews are replacing 50 poles and more than 1.3 miles of power lines for a project that will upgrade the electrical grid in the area. This project represents the company’s commitment to the area with an investment of $277,173 in the electrical system.

“We’ve been planning this project for more than five years, and are excited the work is finally coming together,” said Rich Menges, field engineer – Alliant Energy. “This project will position us to continue to easily make improvements to the overall electrical grid in the future.”

Crews are working in several areas in and around Hanlontown, including work along Highway 9. Motorists are urged to take caution when approaching utility crews.

Work on this project is expected to last until mid-May.

Some customers in the area will experience a small, outage as crews disconnect them from the old circuit to the new equipment. Any customers affected by this work will be personally notified.