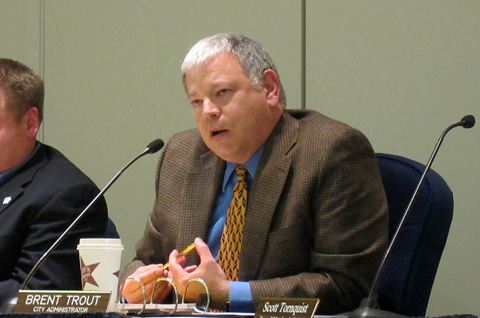 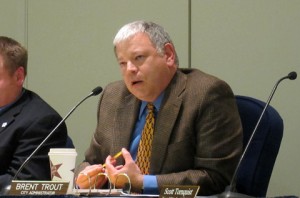 MASON CITY – City Administrator Brent Trout is recommending to the city council that the City pay a Des Moines business over $21,000 to paint white directional arrows here in town.

The Council will vote on the proposal Tuesday night.

The cost is part of what the City calls the “2012 Pavement Marking Program.”  The overall cost to the City will be $99,915.60, all of which will be paid to Quality Striping from Des Moines.  No Mason City businesses bid on the project.

Trout (pictured) last week fully backed a Globe Gazette story that advocated sending work out of the city and mocked the use of city employees to do work such as pavement painting.  Trout readily provided quotes and answers to a Globe reporter.  “It would be silly for us to go to the expense of purchasing a (painting) machine for Mason City just for that purpose,” Trout explained, “and using our manpower when we can hire it out at far less cost.”

When I asked Mr. Trout for clarifications on the painting program and the use of city employees and equipment on the project, he said he was out of town and would answer me next week. He never responded.  Mayor Eric Bookmeyer refused to comment as well.

It has been written here on NIT that city employees had for years painted the pavement in Mason City, using city-owned stencils and equipment and supplies bought here in town.  The wages and dollars were kept here.  According to Trout, that is silly.  My calculations seem to indicate otherwise; the benefit to the community is obvious and clear.  NIT readers, judge for yourselves.

Click here to learn more about painting equipment that would easily manage the bulk of the pavement painting in Mason City at a one-time cost of $2,995.  The equipment could be used year after year.  Wages and paint/supplies would need to be paid for each year and could be bought from a local paint supplier.  Depending on the workload of city staff already on the payroll, part-time or seasonal workers could be hired that could handle the work with little training at a decent wage.

NorthIowaToday.com will report after the meeting on how the City Council discusses and votes on the matter.

Watch a video of how the painting equipment works: