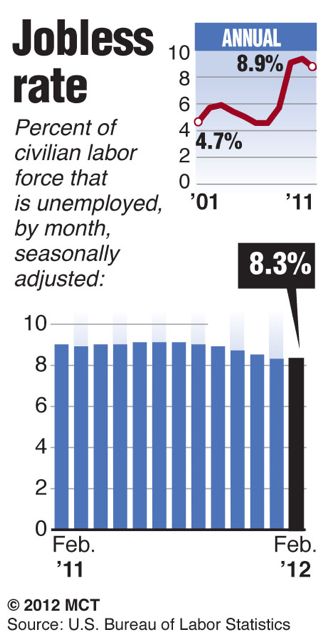 WASHINGTON — Providing solid evidence of a strengthening economy, employers extended their brisk hiring into February — a trend that, if it continues, could change the dynamics of the presidential election campaign.

Employers overall added 227,000 jobs last month, powered by robust gains in health care, manufacturing and business services. Job growth in the past three months has averaged 245,000 a month — about 100,000 more a month than in the previous year, the Labor Department said Friday.

If sustained, the improving economic fortunes, especially in certain swing states that include the hard-hit Sun Belt and industrial Midwest, could provide a big boost to President Barack Obama and his re-election chances.

Seizing on the new report Friday, Obama was careful to avoid gloating about the job growth but nonetheless said: “The key now, our job now, is to keep this economic engine churning.”

His Republican opponents focused on the still-high jobless rate, homing in as they have in the past on the fact that unemployment remains above 8 percent. The Obama administration projected in early 2009 that the nation’s jobless rate would be brought below 8 percent after the Recovery Act stimulus package took effect.

The Republicans’ argument becomes more complicated because of the positive top-line numbers.

“They have to walk the line between not appearing to cheer down the economy but also pointing out the very real underlying problems,” said Matt McDonald, a GOP economic strategist. “If I were them, I would be talking about the millions of missing workers.”

Despite the job gains, the nation’s unemployment rate held steady at 8.3 percent in February, after falling for five straight months. Economists say that’s because an improving economy prompts more people who have been out of work to re-enter the job market. The nation’s labor force — the total number of workers and those looking for work — swelled by nearly half a million people last month from January.

The total number of unemployed people last month remained at nearly 13 million, with 43 percent of them reporting that they had been out of work for more than six months. An additional 8.1 million workers said they were stuck in part-time jobs because of slow business or cutbacks, although they wanted full-time hours.

Most states have seen more consistent and solid job growth recently, though the progress has been uneven and unemployment remains high in many areas.

Although analysts said job growth was likely to slow somewhat in the next several months, the latest report was widely seen as an indication that the economy is now on a steady growth path after 2 1/2 years of a bumpy recovery marked by fits and starts.

J.C. Derenoncourt, 33, had been working full-time in data entry to support his MBA degree studies at night. Last month, after searching for a new job since October 2010, he landed a position as a cost accountant for a Rhode Island plastics manufacturer, Teknor Apex Co.

“It’s been pretty tough; I had lots of rejections,” the Haiti native said. “That’s why I’m so excited.”

Estimates for job growth in the next several months range from 150,000 to 200,000 a month. The forecast for slightly slower job creation reflects weaker U.S. economic growth this quarter.

Lingering problems from the housing collapse, as well as weakness in Europe and more recently higher oil prices, are weighing on the economy.

Moreover, it’s unclear to what extent the recent job gains have been inflated by the mild winter weather. That could mean less need in the spring for new employees at businesses such as restaurants, trucking and construction firms.