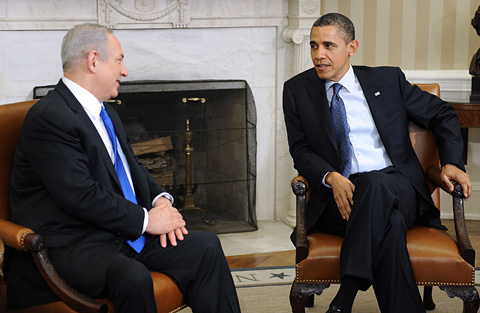 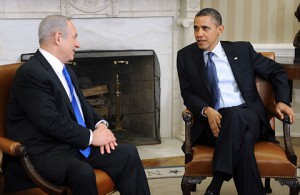 WASHINGTON — President Barack Obama and Israeli Prime Minister Benjamin Netanyahu on Monday sought to offer a united front against Iran’s growing nuclear program but appeared to differ on whether a diplomatic solution remains possible or if military action is needed to prevent Tehran from gaining a nuclear bomb.

At a White House meeting, Netanyahu said he reserved the option to launch a unilateral attack on Iran despite Obama’s position that more time is needed for stiff economic sanctions and international diplomacy to work.

“When it comes to Israel’s security, Israel has the right, the sovereign right to make its own decisions,” Netanyahu told Obama in a brief session with reporters in the Oval Office. “I believe that’s why you appreciate, Mr. President, that Israel must reserve the right to defend itself.”

The two leaders’ last Oval Office meeting in May ended in acrimony when Netanyahu lectured Obama before TV cameras on the president’s proposal to revive moribund Israeli-Palestinian peace talks.

U.S. officials said late Monday that the two leaders continued to disagree about what should trigger military action against Iran, and did not try to resolve their differences in their talks.

They discussed in some detail their expected timeline for developments in Iran’s nuclear enrichment program, but did not make firm commitments on how their governments would respond, according to people familiar with the talks.

David Makovsky, a Middle East specialist at the Washington Institute for Near East Policy, said that “the net bottom line is that neither side wanted to tie his own hands in committing to any set timetable … No one was writing the other side a blank check.”

“The prime minister believes it is important for him to maintain Israel’s right to attack Iran, in the future, if he decides to do so,” said an Israeli official, who spoke on condition of anonymity when discussing sensitive matters.

Iran has preoccupied Washington in recent days as Obama has reaffirmed his determination to end the presumed nuclear threat in a widely publicized interview and in a speech Sunday to the annual convention of a leading pro-Israel lobbying group, the American Israel Public Affairs Committee.

Though Obama pleased Netanyahu by declaring in his speech that he did not bluff about using military force, aides said the Israeli prime minister made clear he remains concerned. Israeli officials say military action is justified if Iran is seen to approach the capability to build a bomb, or if Tehran moves enough of its uranium enrichment program underground to make it less vulnerable to bombing.

The Obama administration says it does not believe military force is necessary unless Iran is actively building a nuclear bomb. The administration believes Iran would need about a year to develop and build its first nuclear weapon should it decide to do so. Iran says its nuclear program is for peaceful purposes.

A senior White House official said that during their meeting Monday, Netanyahu gave Obama a copy of the Book of Esther, the biblical book which tells the story — widely conceded to be apocryphal — of the foiling of an official plot to murder all the Jews in the ancient Persian empire. The official would not say what Netanyahu told Obama about the gift, but did not deny reports in the Israeli media that the prime minister said: “Then, too, they wanted to wipe us out.”

As the two leaders debated Iran’s nuclear program, a group of world powers continued weighing whether to try to resume negotiations with Iran.

The group, known as the P5 plus One, has received a letter from Iran indicating a willingness to resume talks, and its members are debating what kind of commitments to require of Iran. The group, which includes France, Britain, Germany, China, Russia and the United States, want to ensure that the Iranian negotiators are ready to focus on the nuclear program.

When they last met, in Istanbul in January, 2011, the Iranians refused to discuss the nuclear program, and the talks broke down quickly.

Some European governments, notably in Britain and France, have grown skeptical of Iran’s willingness to negotiate, yet there is widespread feeling in the group that it is worth testing whether recent rounds of sanctions have made Tehran more open to giving ground.

While Washington has echoed with talk of war in recent days, some observers warned of the U.S. getting involved in another military campaign.

Jeremy Ben-Ami, president of J Street, a liberal pro-Israel group in Washington, said “a precipitous rush to military action against Iran does not serve the best interests of the United States or Israel.”