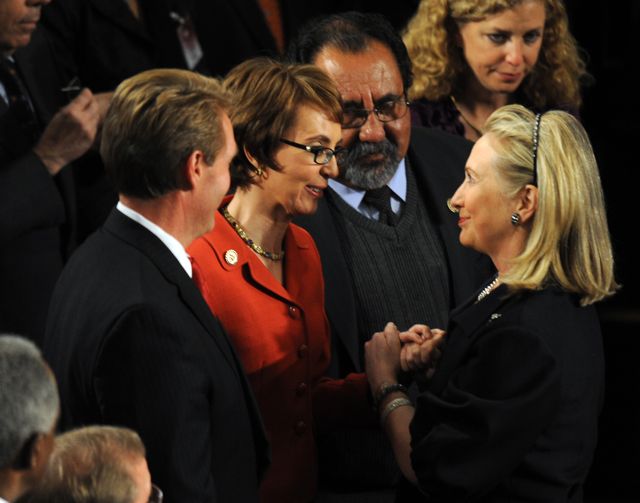 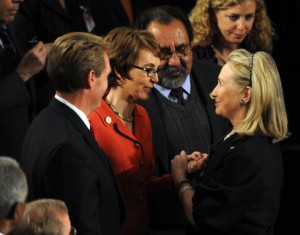 WASHINGTON — A year ago, the shooting of Rep. Gabrielle Giffords weighed heavily in the chamber. A seat with her Arizona delegation was left empty during the president’s State of the Union address. Lawmakers wore black-and-white ribbons in her honor.

Tuesday night, Giffords returned to the House with a standing ovation more than a minute long amid cheers of “Bravo!” from her colleagues. Then, she received a long, emotional hug from President Barack Obama. Giffords rested her head on his shoulder and for a moment they rocked back and forth — all at once a welcome home greeting and farewell embrace following her decision to step down from office and focus on her recovery.

Obama has called Giffords “the very best” of public service, and the president invited her husband, the retired astronaut Mark Kelly, to watch the speech from the First Lady’s box in the gallery. Giffords’ mother Gloria was in the House gallery as well.

The Arizona Democrat left an indelible mark on Congress during her three terms in office, and when she arrived Tuesday with a wide smile, her return was fraught with emotion.

Giffords was shot in the head while meeting with constituents in her Tucson district, and calls for political civility in the aftermath of that tragedy prompted lawmakers to cross party lines in 2011 and sit beside one another during the president’s speech. That tradition continued Tuesday.

Giffords is popular on the Hill, a pragmatic politician who mixed moderate politics with a friendly resolve. Symbolizing her nonpartisanship, she was seated between Arizona colleagues, Republican Rep. Jeff Flake and Democratic Rep. Raul Grijalva. At times during the speech as she rose to applaud the president, a colleague helped steady her at the elbow.

Many in and out of Washington have come to view Giffords as a national heroine. She suffered a massive head injury, when a gunman opened fire at a “Congress on the Corner” event outside a grocery store. Six people were killed and 13 injured at the scene.

Alleged gunman Jared Lee Loughner has pleaded not guilty to multiple federal charges. He has been diagnosed with schizophrenia and found incompetent to stand trial. Doctors are trying to restore his competency as he is being held in a federal prison hospital.

The congresswoman’s office has remained open in the year since the shooting, and Giffords received her first congressional standing ovation from both sides of the political aisle when she returned to Washington last summer to vote to raise the debt ceiling during that divisive debate.

In announcing her resignation on Sunday, Giffords pressed forward with optimism. “I’m getting better. Every day my spirit is high,” she said in a video on YouTube and Facebook.

On Wednesday, the GOP-led House is expected to take up a Giffords bill — bipartisan border security legislation. Giffords is expected to be on the House floor during the vote, as colleagues are also planning a ceremony as she ends her service.

Giffords plans to submit her resignation letter Wednesday, effective at the end of the day.

The Arizona governor, by law, must call a special primary election within three months, followed by a special election two months later, likely this summer.

The border district leans Republican, but less so by the general election in November, when the seat will be contested again.