Fate of US effort to isolate Iran could rest with China 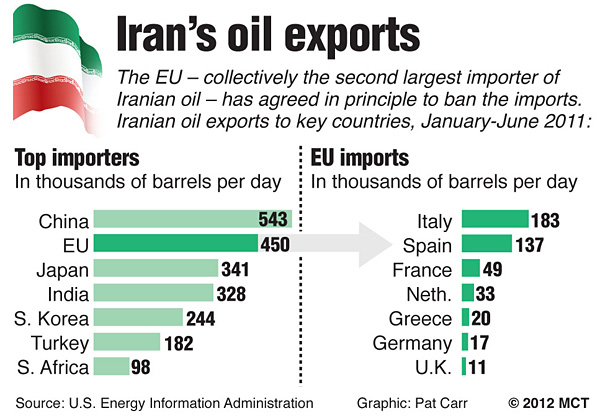 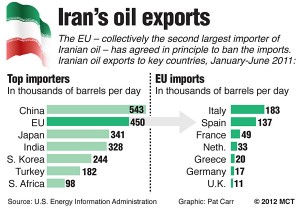 BEIJING — Most days, the announcement of an $8.5 billion joint venture oil deal between Saudi Arabia and China wouldn’t raise eyebrows. Riyadh, after all, is China’s largest supplier of oil. But with the United States pushing for an oil embargo against Iran, China’s third-largest oil provider, the calculus has changed.

China is emerging as a key test of whether the West and its allies will be able to squeeze Tehran into slowing its nuclear program. The role China will play in the U.S.-led effort is still far from clear, but the United States and others are watching Beijing’s moves closely for clues about its intentions.

As the biggest importer of Iranian oil — some 20 percent of Iran’s output — China has great sway over American plans. Its decision to accept, partially agree to or spurn the push for new economic curbs on Tehran will be crucial to Washington’s efforts to starve Iran’s economy as punishment for the country’s alleged attempts to develop a nuclear weapon.

For years, and in private, U.S. diplomats have been working quietly to achieve just that outcome. McClatchy Newspapers reported last May that secret diplomatic cables obtained by WikiLeaks document how the State Department pressed Saudi Arabia to step up its oil exports to China in a bid to weaken rival Iran’s foreign oil sales and Tehran’s sway over Beijing. It worked, because by 2010 Saudi Arabia had become the top oil supplier to China.

It was possible partly because Saudi crude is similar in composition to Iranian oil.

“In this case, the Saudis could do a lot of the offset of the cessation of sales by Iran,” John Kilduff, a veteran energy analyst with Again Capital in New York, said in a recent interview.

But it’s not just a question of Saudi supply to China. Europe, South Korea and Japan need to replace Iranian oil, too.

Earlier this month, the European Union and Japan, Iran’s second- and third-largest oil customers, signaled willingness to reduce their Iranian oil orders. When and how they do that, however, remains unclear. The EU and Japan combined bought more than 30 percent of Iran’s exports in the first half of last year.

The EU announcement was expected to be formalized Jan. 23 at a meeting of ministers, but news reports suggest that the embargo could be delayed by six months to allow nations more time to find replacement oil sources.

During a visit last week by Treasury Secretary Tim Geithner, Japan committed to begin reducing its oil imports from Iran. Soon after Geithner departed, however, Japan began giving conflicting accounts of what it had agreed to do.

China’s public actions were the opposite of the EU’s and Japan’s. Chinese officials were widely seen to have rebuffed efforts by Geithner to get them to sign on during his trip to Beijing last week. China often has criticized American pressure on Iran as unproductive. State-run media slammed U.S. sanctions — announced last Thursday — against a Chinese firm that exports gasoline to Iran.

But Prime Minister Wen Jiabao’s presence in Saudi Arabia — a bitter rival of Iran — spoke otherwise. It raised at least the possibility that Beijing was pondering whether it could offset Iranian oil with supplies from Arab countries should Tehran become a complete financial pariah.

There’s been no official word along those lines from the Chinese government or state media.

“We should note that Premier Wen’s visit was arranged a long time before this crisis,” said Li Guofu, the director of the Center for Middle East Studies at the China Institute of International Studies, a Foreign Ministry research center.

In a telephone interview Monday with McClatchy Newspapers, Li was cautious about drawing any connection between Wen’s presence in the Persian Gulf and the standoff between Iran and the West.

“Premier Wen’s visit is within the interests of China,” Li said.

Wen’s six-day trip, which began over the weekend, marks the first visit to Saudi Arabia by a Chinese premier since 1991, and the first ever by a premier to the United Arab Emirates and Qatar. All three Arab nations sit across the Persian Gulf from Iran.

Tensions have flared in the Gulf, with Iran threatening to close the Strait of Hormuz, through which much of the region’s oil exports pass. Iran is angry about new U.S. sanctions that bar any financial firm that does business with Iran’s central bank from accessing the U.S. financial system.

Pentagon chief Leon Panetta has warned Iran that he intends to ensure safe passage of oil. Oil prices have risen sharply in January on fears of supply disruptions.

During Wen’s trip, China’s state Sinopec oil company reportedly inked a joint venture agreement with Saudi Arabia’s Aramco worth at least $8.5 billion that gave the Chinese company a 37.5 percent stake in an oil refinery in the Red Sea port of Yanbu. The operation, slated to begin by 2014, is to process some 400,000 barrels of crude a day.

The Dow Jones financial news wire, however, quoted the chairman of Sinopec at the signing Saturday as saying that his company hadn’t requested any additional crude oil from Saudi Arabia.