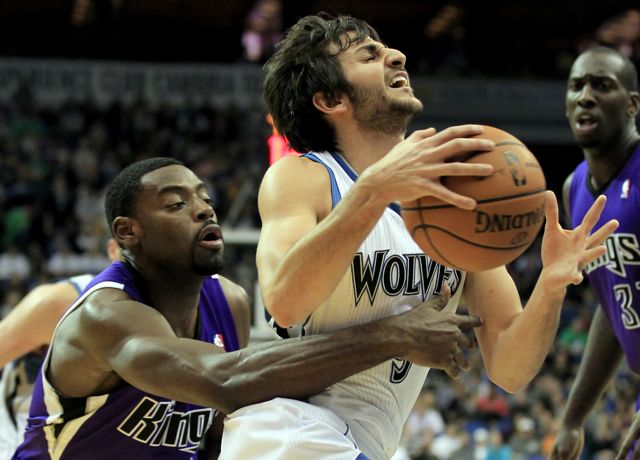 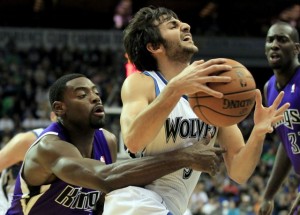 MINNEAPOLIS — Ricky Rubio has arrived on these shores and in the past month has received the kind of attention and hype that seemingly grows by the day.

Then there’s Luke Ridnour, who might have put a pause, if for just an evening, to Rubio’s publicity parade in a 99-86 victory over Sacramento at Target Center.

(PHOTO: Ricky Rubio (9) of the Minnesota Timberwolves drove past Tyreke Evans (13) of the Sacramento Kings in the first quarter at the Target Center in Minneapolis, Minnesota, Monday, January 16, 2012. )

Just a month ago, Ridnour looked like the odd man out when the Wolves went and signed a third smallish guard, J.J. Barea.

Ridnour started alongside Rubio for the third consecutive game on Monday and delivered a 25-point, nine-rebound performance that assured victory just when it looked like Sacramento might sneak away with one.

Down by a point late in the third quarter, the Wolves improved to 5-8 with a winning fourth quarter in which Ridnour and not Rubio or Kevin Love starred.

While Barea sat out his third consecutive game because of a sprained ankle, Ridnour played 38 minutes and provided big play after big play.

He blocked a shot.

He stole the ball.

He scored, seemingly at will at times against a Kings team that struggles to score but was still in the game until midway through the fourth quarter.

He did so on a night when Love became the first player since Hakeem Olajuwon in 1992 to open the season with double-doubles in the first 13 games.

Love finished with 33 points and 11 rebounds.

On Saturday, the Kings scored 60 points in a game at Dallas and lost by 39 points.

In doing so, their 25.6 percent shooting was the worst since the franchise moved from Kansas City to Sacramento in 1985.

Their 60 points scored were the second fewest in that time and they also tied a franchise low for points in a half with just 23.

They scored 46 by halftime alone on Monday, and had a four-point lead by then as well.

Wolves No. 2 overall pick Derrick Williams played nine first-half minutes after he had played only seven minutes in Saturday’s loss at Atlanta.

Little more than a week ago, Wolves coach Rick Adelman talked about how he needed to find ways to get Williams on the court because of his explosiveness, and in a four-game span played 26, 30, 28 and 22 minutes.

Suddenly, he has played little in the first half and not at all after halftime for two consecutive games.

Before Monday’s game, Adelman attributed Williams’ scant playing time on Saturday to matchup issues and the fact that Adelman needed to get center Nikola Pekovic onto the floor for inside presence after the Hawks slapped a zone on the Wolves and the Wolves responded by “wandering” all over the perimeter looking for shots.

“Once the game starts slipping like it was slipping the other night, it’s really tough to make changes at that point,” Adelman said.

When it started to feel like it was slipping away from the Wolves on Monday, Adelman again went to Pekovic for second-half stretches to counter Kings center DeMarcus Cousins.

“I’d still like to get him on the floor, and we have to find ways to do it,” Adelman said. “One of the things with people coming back (from injuries), it changes a lot. You get suggestions a lot about playing this guy or playing that guy, but the bottom line is it takes minutes away from somebody else.

“You play Darko and Pek together and it takes minutes away from Anthony (Randolph) and Derrick.”