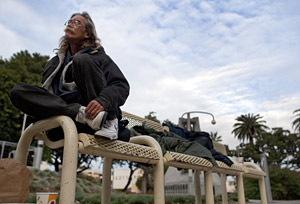 ANAHEIM, Calif. — As word spread of an arrest in the killing of four Orange County homeless men, people came to the parking lot of an Anaheim strip mall on Sunday to share memories of the latest victim.

(PHOTO: Sitting in the Santa Ana, California, Civic Center plaza area where he usually sleeps, homeless man Danny Pierce, 56, said he always keeps an eye out for safety. There is relief in the homeless community after a suspect has been arrested in the four recent killings of homeless men in the area.)

After all, everyone knew John Berry, who was a fixture here, where apartments, strip malls and mobile homes sit above the Santa Ana riverbed.

For years, the man with the long white beard could be found camping out on its banks, reading a book next to his mountain bike, or taking in the view of the dark sky.

Friends said Berry, 64, was a Vietnam veteran who would have long, spiritual talks with people from all walks of life.

He was the unofficial therapist of the neighborhood.

So it was only fitting that on Friday night, people sprang into action when he was stabbed outside a fast-food restaurant in a busy shopping center.

Itzcoatl Ocampo, 23, was quickly taken into custody. Authorities suspect he is responsible for the four killings over the past month.

The Associated Press reported Sunday that Ocampo’s father is himself homeless, and said his son last week warned him about the danger of being on the streets.

Refugio Ocampo told the AP that on Jan. 11 his son showed him a picture of the first victim, saying, ‘This is what’s happening.’

“He was very worried about me. I told him, ‘Don’t worry. I’m a survivor. Nothing will happen to me,’” Refugio Ocampo said.

In Anaheim, Friday’s events were particularly wrenching for Darin Wilson, who said John Berry had been his friend for the last half dozen years. Wilson said he and Berry recently talked for hours about nature, astronomy and their struggles in life. Whenever he could, Wilson would extend a hand to Berry by inviting him over to his house for lunch. He gave Berry his phone number and offered to help him get off the streets, but Berry turned down most offers of assistance. Once he accepted a hamburger; another time, a bottle of juice. That was all.

The night before Berry was killed, Wilson ran into his friend in the Carl’s Jr. parking lot.

Wilson was in his Ford Bronco. “Thank God you didn’t get killed,” he told Berry from behind the wheel. He said Berry looked at him with an expression a fear on his face.

The following evening, Wilson was sitting on his front porch in the Friendly Village mobile home park when a young man in a black hooded jacket staggered past, out of breath. The man was darting around nervously, he said. “He looked like he was looking for someplace to hide.”

When Wilson called out, the man took off through some bushes and turned the corner toward the next row of homes. Moments later, another man by, also breathing hard, a cellphone glued to his ear.

Some witnesses said they saw the suspect try to shed clothing and discard items in the trash as he ran through the mobile home park.

Debi Harper was inside her mobile home on her computer when her yard seemed to shake. A man ran by and yelled at her, “Close your windows, lock your doors. The serial killer’s out here!”

She and her daughter hid in the bathroom. Later a security guard for the mobile home park came to check the shed in her yard, telling her, “We think he went over your fence.” Then police came by and warned her again to stay inside.

Like others, she didn’t know until later that the person who had been killed that night was Berry.

Everybody knew him,” she said. “I made him breakfast one time.”

Joyce Armstrong, 59, would often exchange hellos with Berry during walks along the riverbed, where he would sit and read next to garbage bags filled with his belongings and a clunky mountain bike he used to cart his life around.

In recent months, she would chat with him outside the Carl’s Jr., and would make a point to ask about his military service.

“I said, ‘You know you can get help if you want it,’” she told him, but he brushed it off, telling her, “That was a long time ago.”

“It wasn’t something he was blaming for his situation. He was happy being out here,” Armstrong said. “I asked him how he gets by. He told me he trusted in the Lord.”

Cheryl Gallant, who lives across from the Yorba Regional Park, said she felt safe with Berry around. Because he was there, she and her daughter would walk the family dogs late at night without worry.

“He was the eyes of the park,” she said.

She said she met Berry 12 years ago while walking on the river trail and immediately took to his kind nature. He had a calm, soothing effect on people, she said, and she would talk to him often — about work or other life stressors.

“To me, he was a therapist,” she said. “He had some positive things to say.”

Word of the arrest made its way slowly to Orange County’s homeless.

Danny Pierce, 56, who sat on a bench in downtown Santa Ana on Sunday afternoon with two plastic containers of food at his feet, said it was good to hear about the suspect but he didn’t feel safe, not yet.

“If I see someone I haven’t seen before, I keep my eye on them until they are gone,” he said.

Providers in the area said they would continue outreach, including handing out safety kits with whistles and flashlights.

“People are still feeling pretty uneasy and unsettled because this has happened so quickly,” said Jim Palmer, the president of the Orange County Rescue Mission, which put together the kits. “They don’t feel the same sense of safety as they did prior.”

They’re also not sure whether to believe that it’s all over — that one person killed all four men and that there’s no killer at large.

“There’s this new feeling of vulnerability that people haven’t really felt before at a community level.” he said. “This is going to take some time.”