This time, 49ers’ offense picks up their defense 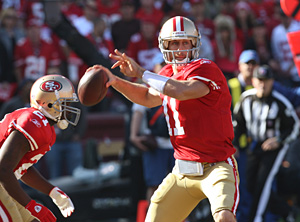 By Jerry McDonald, The Oakland Tribune –

SAN FRANCISCO — The season-long perception that the 49ers are a team that has been carried by its defense took a hit Saturday.

Twice the 49ers gave up a lead late in the fourth quarter on big plays by the New Orleans Saints, and each time the offense came back with a touchdown in a 36-32 divisional playoff win at Candlestick Park.

“They got us off the hook,” safety Donte Whitner said. “We were supposed to close out the game, and we didn’t.”

New Orleans quarterback Drew Brees completed 40 of 63 passes for 462 yards and four touchdowns, including a 44-yard touchdown to Darren Sproles with 4:02 left and a 66-yard touchdown to Jimmy Graham with 1:37 remaining.

It was uncharacteristic for a defense that gave up only 14.3 points per game in the regular season to give up 15 points in the last 4:02, but that didn’t stop coach Jim Harbaugh from calling it a “phenomenal” performance.

Such is the skill and precision of the New Orleans offense, when both sides paid homage to the 49ers’ defensive ability despite the barrage of yardage and points.

Brees, who threw interceptions, to Goldson and Tarell Brown, and went through a rough stretch where he completed only 10 of 25 passes, said: “That’s a great defense. One of the best defenses in the league.”

In what ended up a back-and-forth game, the 49ers had to be content with breaking serve enough times to get to the NFC championship game.

Besides the two interceptions, the 49ers stopped New Orleans from scoring on its opening drive when Whitner delivered a knockout blow to running back Pierre Thomas, whose fumble was recovered by Patrick Willis at the 2-yard line.

Carlos Rogers broke up a potential long touchdown pass from Brees to Adrian Arrington on a post pattern, and 49ers defensive backs got their hands on eight passes in all.

The 49ers mixed their pressures and defensive schemes, at times sending three rushers and playing coverage and changing things up with an extra rusher or two. Sometimes Brees had ample time to pass and couldn’t find open receivers, and with a pass rush led by Justin Smith, was also sacked three times.

Forty-Niners defensive coordinator Vic Fangio pointed to three New Orleans possessions late in the first half after the Saints had closed within 17-14 after trailing 17-0.

Brown made a twisting interception on the first play after the 2-minute warning, the Saints were forced to punt from their own 18, and then never got a shot at a late field goal after a sack-fumble against Alex Smith at the 49ers’ 45-yard line.

Yet all the positive plays appeared to have been erased with the touchdown passes to Sproles and Graham. Willis not only was victimized on the 66-yard touchdown pass to Graham but also had primary coverage on Graham’s leaping 14-yard touchdown reception that opened the Saints’ scoring after trailing 17-0.

“I was feeling low. I’m not going to lie,” Willis said. “But that’s one thing I love about my teammates is that no matter how low you’re feeling, they always find a way to pull you back up. Just to have this ‘W,’ to go on and play another week, to have a chance of redeeming myself feels great.”

Following Graham’s second touchdown, with the 49ers trailing 32-29, it was time for the offense to pick up the defense.

“Nobody expected with a minute and 37 seconds left that our offense was going to score, but they did,” Rogers said.