Little sloppy, but Bulls win fifth game in a row 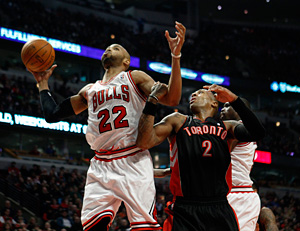 CHICAGO — The Bulls and Raptors each were playing their fifth game in six nights Saturday and looked about as fresh as expired milk.

(PHOTO: The Chicago Bulls’ Taj Gibson (22) drives to the basket against the Toronto Raptors’ James Johnson (2) during the first half at the United Center in Chicago, Illinois, on Saturday, January 14, 2012.)

This game, which the Bulls won 77-64 for their fifth straight, was a lockout special.

Shots were short. Legs were tired. Neither team made a free throw until the 9 minute, 41 second mark of the third quarter and the Raptors didn’t until 7:14 remained in the game.

This wasn’t exactly what James Naismith had in mind when he nailed up the ol’ peach baskets at the Springfield (Mass.) YMCA.

“We’re not concerned with the aesthetics,” coach Tom Thibodeau said. “We just want the wins.”

And the Bulls just closed a brutal stretch of nine games in 12 days with an 8-1 mark. They also moved to a league-best 12-2 by virtue of their 31st regular-season home victory in their last 33 tries.

By holding the Raptors to 34.9 percent shooting and their meager offensive output, they continued their NBA record for fewest points allowed in the first five home games. They now have surrendered an average of 66.8 points at the United Center.

The Thibodeau-driven defense is in full effect.

“Thibs is always going to try to get the best out of us, even though he has never run up and down the court — ever,” a smiling Joakim Noah said.

Gibson scored nine of his 11 in the fourth as Thibodeau rode the smaller lineup for more speed and shooting to combat the Raptors’ zone defense. Lucas added another 3-pointer and scored eight of his 10 in the final period.

“They gave us energy,” Rose said. “On this team, you never know who’s going to step up. Taj and John Luke work hard. The team knows what they can do.”

Gibson posted a double-double of 11 points and 12 rebounds in just 23 minutes, one of three along with Rose’s 18 points and 11 assists and 17 points and 13 rebounds for Carlos Boozer.

Despite not playing the fourth quarter because of this lineup, Joakim Noah tied Gibson with 12 rebounds as the Bulls outrebounded their 11th straight foe.

“One thing about our team is we have that mindset no matter how many minutes you play or how many touches you get no one should play harder than you,” Gibson said.

Rose averaged 40 minutes in the victories over the Celtics and Raptors and said his sprained left big toe is no longer an issue.

Luckily, this game is as well.