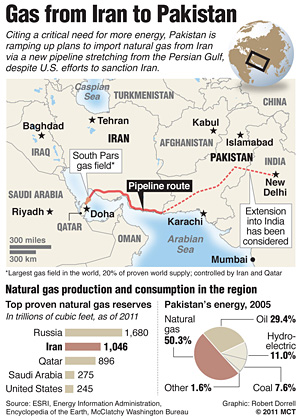 ISLAMABAD — With a decision to fast-track the construction of a natural gas pipeline from Iran, Pakistan is underscoring not only the energy needs of its flailing economy but also its growing estrangement from Washington.

The move came despite the objections of the United States and could put Pakistan at risk of violating U.S. sanctions on Tehran aimed at denying Iran hard currency that it needs for its nuclear and ballistic missile programs. But as President Asif Ali Zardari said in a rare television interview last week, Pakistan has no choice but to seek greater ties with its neighbors — Iran, China, India and Afghanistan — “because the economies of the West are in trouble and not in a position to help us.”

Zardari’s comments were the clearest enunciation yet of a change in Pakistan’s foreign policy away from the United States as Islamabad plans for 2014, when U.S.-led NATO combat forces are expected to stand down in Afghanistan.

Zardari said Pakistan would not be drawn into new American “theaters of war” in the region — a clear reference to fresh U.S. sanctions against Iran and tensions stemming from Tehran’s threat to close the Strait of Hormuz, a vital waterway for oil traffic. Pakistan, he said, would accelerate the construction of a natural gas pipeline from Iran to plug a supply shortfall that in December brought the economy here to a near standstill.

“We will not limit our commercial relations with any country because of the political whims of any outside power,” Zardari told the Geo cable news channel in an interview aired Friday. “Our priority is the needs of our population of nearly 200 million people.”

The U.S. has repeatedly urged Pakistan to reconsider its plans to import up to 1 billion cubic meters of natural gas a year beginning in 2017 from Iran’s South Pars field — part of a geological structure under the Persian Gulf that forms the world’s largest deposit of natural gas. Last week, State Department spokeswoman Victoria Nuland said, “We’ve made absolutely clear over many months now our concern about this deal and we will continue to talk to Pakistan about it.”

Iran has completed construction of the $7.5 billion pipeline up to the border with Pakistan, which has begun preparing to assemble its section. The countries are targeting mid-2014 for gas supplies to begin flowing.

Foreign policy analysts linked Pakistan’s growing ties with Iran to the deterioration of its relationship with Washington since May, when U.S. officials decided not to inform their Pakistani counterparts of the covert U.S. raid that killed Osama bin Laden 60 miles north of Islamabad.

The relationship plunged to its lowest point after NATO forces inadvertently killed about two dozen Pakistani soldiers in a friendly-fire incident on the Afghanistan border in November. Pakistan has since barred the passage of NATO military supplies through its border crossings into Afghanistan, while a parliamentary committee weighs possible foreign policy changes that could include attempting to renegotiate U.S.-Pakistani defense agreements. A special session of parliament is expected to vote on the committee’s recommendations later this month.

“Since 9/11, Pakistan has been obliged to cede a lot of regional strategic decision-making to the U.S, and its relations with Iran suffered badly,” said Ghani Jafar, an expert and commentator on Pakistan-Iran relations.

“Now it has chosen to exercise its strategic prerogative of building good relations with Iran. India to the east has been hostile, and Afghanistan to the northwest has hardly been a friend. Come what may, we have got to have Iran as a friend,” Jafar said.