Bulls too much for Timberwolves 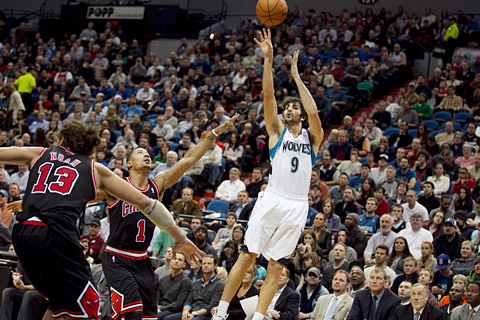 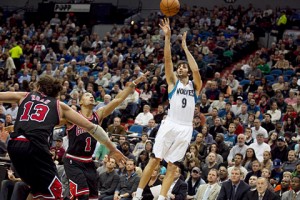 MINNEAPOLIS — Shortly after slicing and dicing the Minnesota Timberwolves in another breathtaking performance, Derrick Rose casually revealed he aggravated a turf toe condition that has flared from time to time since his second season.

(PHOTO: The Minnesota Timberwolves’ Ricky Rubio (9) shoots a jumper over the Chicago Bulls’ Derrick Rose in the first quarter at the Target Center in Minneapolis, Minnesota, on Tuesday, January 10, 2012. Chicago topped Minnesota, 111-100.)

So are the Chicago Bulls, who downed the Timberwolves 111-100 Tuesday night at Target Center after giving back all of a 24-point lead.

For all the numerous nitpicks from fans — how Joakim Noah and Carlos Boozer again sat out the fourth; how Rose and Luol Deng played the entire second half — the Bulls are 9-2. They have played eight road games. And Richard Hamilton, a starter, and C.J. Watson, a rotation player, have been injured.

In this unique season of attrition, which included the Timberwolves finishing three games in three nights and the Bulls playing their second in a similar test that concludes Wednesday, survival is part of success.

“I didn’t think we played tough with the lead,” coach Tom Thibodeau said. “I did like our resolve at the end.”

Rose, as usual, showed the most.

That’s not to overlook Deng, who bounced back with 21 points and 11 rebounds and two clutch fourth-quarter baskets. Or Ronnie Brewer, who added 17 points. Or Kyle Korver, who buried all three 3-pointers en route to 13 points.

But Rose’s 31 points and 11 assists featured 14 fourth-quarter points and almost as many highlights.

“You don’t want to take it for granted,” Korver said. “But you almost kind of expect it now. He has done it so many times. He’s unbelievable to have the explosiveness he does with all the minutes he’s playing. He just hates to lose and takes over at the end.”

Rose did at the beginning as well, sinking his first six shots en route to 14 first-quarter points. But a tumble with Anthony Tolliver midway through the first half forced Rose to the locker room, where he said trainers taped his left big toe and gave him ibuprofen.

“When I fell, he fell on the back of my foot and pushed my toe down,” Rose said. “I can’t bend my big toe at all, so it hurt pretty bad. … But I’m fine. I finished the game. Toward the end, I didn’t feel it. I’m not sitting out. I know that. I will be playing (Wednesday).”

The Timberwolves closed the first half with a 20-2 run and coach Rick Adelman opened the second half with a smaller lineup featuring three new starters, including Ricky Rubio. He drew praise from the Bulls after his 13-point, 12-assist performance. Kevin Love had 20 points and 12 rebounds.

But the Bulls won the rebounding battle 47-30 despite finishing small to match Adelman’s duel point-guard attack of Rubio and Luke Ridnour surrounded by shooters. Noah, before he sat, had 11 rebounds.

“He went after it a lot more, which is a good sign,” Thibodeau said. “The more he does that, the more he’ll get into rhythm. Going small allowed us to do more switching.”

And then Rose flipped his switch.