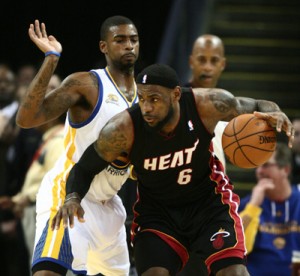 OAKLAND, Calif. — Miami Heat star Dwyane Wade had some advice for his good friend, Golden State Warriors forward Dorell Wright, who has struggled mightily on offense so far this season.

“He needs to shoot more,” Wade said. “Not against us, but against other teams.”

(PHOTO: The Miami Heat’s LeBron James (6) dribbles against the Golden State Warriors’ Dorell Wright in the first quarter at the Oracle Arena in Oakland, California, on Tuesday, January 10, 2012. )

Wright listened to part of that advice. Tuesday against Miami, he took a season-high 15 shots. He scored eight points in overtime to lift the Warriors to a 111-106 upset of the Heat.

The losing streak was largely due to Golden State’s offensive struggles. Wright came into the game averaging 5.8 points on 32.7 percent shooting. He had missed 22 of his 27 attempts from 3-point range.

Tuesday, Wright knocked down six 3-pointers and finished with 20 points to go with nine rebounds.

Wright opened overtime with a 3-pointer. Minutes later, he scored five straight points, his break-away dunk putting the Warriors up 107-104 with 1:06 left.

Wade answered with a jumper. But guard Monta Ellis — who finished with 22 points—put Golden State back up by three, 109-106 with a pull-up over Miami forward Shane Battier.

The Warriors, needing one more stop, forced Wade into a missed bank shot and a bricked 3-pointer by James. Guard Nate Robinson, who led the Warriors with 24 points off the bench, knocked down a pair of free throws to seal the victory. Robinson was 14-for-14 from the free throw line.

The Warriors can honestly say their defense kept them in the game. Wade finished with 34 points and six rebounds. James had 26 points, 11 rebounds and seven assists.

Still, even with an overtime period, the Warriors still held Miami below its season average of 108.3 points per game. The game made it to overtime thanks to lock-down defense by the Warriors.

Golden State, which had trailed by as much as 17, held Miami to 12 points in 2-for-17 shooting in the fourth quarter.

This time, though, it was Robinson and not Ellis who provided the offense. Robinson scored 15 points in the fourth quarter.

His 3-pointer cut Miami’s lead to 93-90 with just over two minutes left. Ellis then blocked a lay-up by Udonis Haslem, which led to a layup by Robinson and a Miami timeout. During the timeout, Haslem picked up a technical foul. Robinson’s free throw tied the game at 93.

Golden State turned the ball over the next two possessions, and free throws put Miami ahead 96-93. But Wright knocked down a 3-pointer to tie the game with 31.2 seconds left.

After a stop, Golden State had a chance to win it in the final seconds. But Ellis failed to get a shot off, sending the game into overtime.