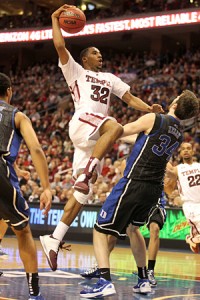 By Keith Pompey, The Philadelphia Inquirer –

PHILADELPHIA — On Monday, Temple forward Anthony Lee said the outcome of Wednesday’s game against Duke would be a barometer of how the Owls will play the rest of the season.

If so, things should go smoothly.

(PHOTO: Temple’s Rahlir Hollis-Jefferson (32) drives to the rim and shoots over Duke’s Ryan Kelly in the first half at the Wells Fargo Center in Philadelphia, Pennsylvania, on Wednesday, January 4, 2012. Temple toppled Duke, 78-73.)

The undermanned Owls upset the fifth-ranked Blue Devils, 78-73, in front of a sellout crowd at the Wells Fargo Center.

The victory extended Temple’s winning streak to four games. The Owls (10-3) also snapped a nine-game losing to streak to Duke (12-2). Temple’s last victory was a 59-58 win at the Spectrum on Jan. 25, 1996. This time, the Owls did it without two starters — center Micheal Eric (right kneecap injury) and swingman Scootie Randall (left knee). Randall has yet to play this season.

“This is No. 1,” said fifth-year guard Ramone Moore, who ranked this atop his best moments as an Owl. “Like I said, it hasn’t hit me yet.

“Rahlir (Hollis-Jefferson) and Khalif (Wyatt) came through for us tonight, man. Whenever you beat Duke, it’s just something big.”

And on this night, no one was bigger than Wyatt.

“He’s got huge courage,” Temple coach Fran Dunphy said. “He just has no fear. I think that’s what you need in a game like this.

“He made those threes and gave us a little bit of space, and he can do that.”

So what did Wyatt think of his performance?

Despite giving up four to five inches in the post, Hollis-Jefferson, a 6-foot-6 junior forward, finished with a season-high 17 points, 6 rebounds, and a career-best-tying 4 assists.

The Owls also shut down Duke guard Austin Rivers and Seth Curry. Rivers, a standout freshman and son of Boston Celtics coach Doc Rivers, made just 3 of 11 shots to finish with 12 points. Curry, the younger brother of Golden State Warriors guard Stephen Curry, was held to six points on 2-of-5 shooting.

“I’m disappointed in our performance,” Duke coach Mike Krzyzewski said. “But that’s not going to be what I am going to talk about, because I thought they played really well.

“So it’s more on them playing well. In order to beat a team that’s playing really well, you have to play really well. And we didn’t show that.”

After Brown made a foul shot, Jefferson made a pair to give Temple a 78-70 cushion with 12.4 seconds left.

“Every time we needed a stop, it seemed like we got one,” Wyatt said. “We kept getting big stops and big rebounds, and we just played really tough.”