Sunflower Staters lead No. 14 Kansas to victory over No. 23 K-State 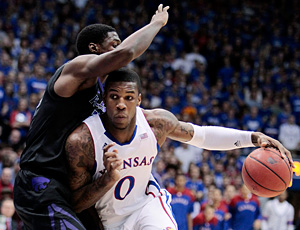 LAWRENCE, Kan. — Conner Teahan is the only Kansas native among the team’s regulars. Travis Releford is the only one that attended a Sunflower State high school.

It only seemed natural both would step up in a 67-49 victory over Kansas State.

Releford, who played at Bishop Miege of Roeland Park, Kan., scored a career-best 16 points and played solid defense throughout the game. With 11 rebounds, he recorded the first double-double of his career.

It didn’t come easily for the Jayhawks.

Out of a timeout with 12:20 remaining, Teahan found himself open in front of the Kansas bench. Swish.

The Wildcats’ answered with a Rodney McGruder bucket to make it a four-point game, and after an exchange of empty possessions, Teahan buried his second deep ball from the opposite side.

Quickly the advantage was back to double digits and the 14th ranked Jayhawks, 11-3, were on their way to the victory in the conference opener.

No. 23 Kansas State, 11-2, made Kansas work, but the Wildcats sang a familiar tune. They got off to a horrible start, which has become custom in Lawrence.

With Robinson having his way on the boards, and Kansas aggressiveness paid off in a 35-20 halftime lead.

The Jayhawks had slipped in the rebounding department lately, but not in the first half as they outrebounded K-State 24-12. Robinson had 10 and with nine points was on his way to his 10th double-double of the season. He finished with 15 points and 14 rebounds.

Turnovers prevented a larger halftime. Kansas turned it over 10 times – 20 for the game—and mistake-prone Tyshawn Taylor had half of them.

The Jayhawks had hounded K-State into 28 percent first-half shooting, shot 50 percent themselves, and probably should have had a lead in the 20s.

But back roared the Wildcats in the first eight minutes of the second half. Samuels, who had 1 first-half point, had 11 in a 16-4 run that opened the half.

The Kansas lead was down to three, 39-36, when Teahan hit the first of his threes.

Rodney McGruder finished with 15, Samuels 12, but Kansas State got hammered on the boards, 50-26.