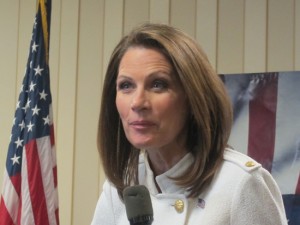 MANCHESTER, N.H. — Michele Bachmann, who finished a distant sixth in Tuesday’s Iowa caucuses, will hold a news conference Wednesday morning where she is expected to discuss the future of her bid for the Republican presidential nomination.

Feeding speculation that the Minnesota congresswoman may end her campaign, the Associated Press reported that she has canceled a planned trip to South Carolina, which loomed as a key showdown in the nomination fight after next Tuesday’s New Hampshire primary.

Bachmann and Texas Gov. Perry had each planned to skip ahead to the Palmetto State as other Republicans headed to New Hampshire. Perry announced Tuesday night that he would instead return to Texas to assess his viability going forward.

Wesley Donehue, Bachmann’s senior South Carolina adviser, said he did not know whether she was scratching plans to campaign this afternoon in South Carolina.

“They haven’t told us they’re canceling the trip or changing anything,” he said in an interview. “We might find out when the rest of the world finds out.”

As she spoke to her supporters Tuesday, Bachmann gave no sign that she would drop out of the race despite a significant loss in the state where she was born and where she staked her campaign, winning a summer straw poll in Ames.

She said there would be “many more” chapters to the campaign and at one point suggested there could be “another Michele” in the White House.

“Just be prepared,” she said. “The pundits and the press will again try to pick the nominee based on tonight’s results.”