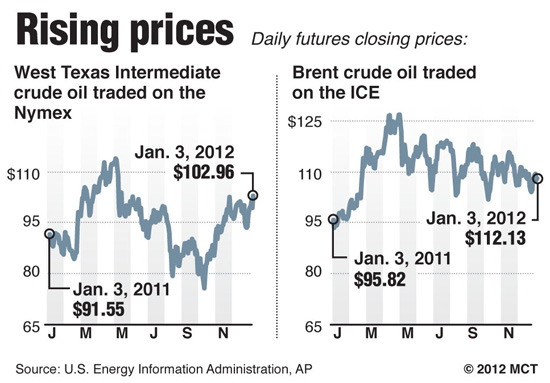 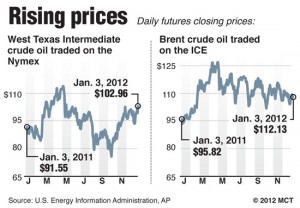 WASHINGTON — The possibility of a confrontation between the United States and Iran appeared to rise Tuesday after the Obama administration declared that it would disregard an Iranian warning against moving a U.S. aircraft carrier strike group into the oil-rich Persian Gulf.

The potential for a crisis that could disrupt Gulf tanker traffic that carries some 40 percent of the world’s seaborne oil sent international petroleum prices soaring more than $4 a barrel, a potential threat to the struggling U.S. and global economies.

The rise in tensions comes as the Iranian economy is beginning to suffer serious impacts from a raft of U.S. and European sanctions imposed on Tehran for rejecting repeated U.N. demands to halt a nuclear program. Iran is widely believed to be secretly developing nuclear weapons, but Tehran denies the charge.

The Iranian currency, the rial, plunged to a record low against the U.S. dollar, reportedly triggering a run on banks by Iranians anxious to protect their savings by buying the American currency before the exchange rate worsened.

Ian Bremmer, the president of the Eurasia Group, which advises corporations on foreign policy risks, said he thought that the Iranian threat amounted to bluster because of the impact a confrontation with the United States would have on Iran’s own struggling economy.

“It would be economic suicide for them, but they are absolutely willing to push the needle here because the stakes are high and they are being squeezed,” he said.

Gen. Ataollah Salehi, the Iranian army chief, was quoted by state-run news media as warning that Iran would take unspecified action if the United States sends a nuclear-powered aircraft carrier, the USS John C. Stennis, and its strike group of five warships, into the Gulf.

“We recommend and warn the aircraft carrier not to return to its previous position in the Persian Gulf,” Salehi was quoted as saying by Press TV, a state-run English-language satellite news channel. “We are not in the habit of repeating a warning and we warn only once.”

The Pentagon, however, declared that “the deployment of U.S. military assets in the Persian Gulf will continue as it has for decades.”

“These are regularly scheduled movements in accordance with our long-standing commitments to the security and stability of the region and in supporting ongoing operations,” said Pentagon spokesman George Little. “These carrier strike group deployments are necessary to maintain the continuity and operational support to ongoing missions in the U.S. Central Command area of responsibility.”

The escalating frictions follow a threat by Tehran last week to blockade the Strait of Hormuz, the narrow passageway at the southern end of the Gulf, if the West imposes an oil embargo on Iran, a move that the European Union is expected to take later this month.

A senior Iranian lawmaker was quoted by Press TV on Tuesday repeating the threat to close the strait.

“If an embargo is imposed on Iranian oil exports, we will certainly take measures to block oil shipments through the Strait of Hormuz by other counties,” said Esmail Kowsari, the deputy chairman of the Iranian parliament’s national security and foreign policy committee.

Tehran has frequently threatened to close the strait for various reasons. But Salehi’s comment was the most aggressive of a series of statements that Iran has issued since the latest round of tensions began when the U.N. International Atomic Energy Agency reported in November that Iran could secretly be working on a nuclear warhead for a ballistic missile.

The Stennis strike group steamed out of the Gulf on Dec. 27 as Iran conducted a 10-day naval exercise in the southern portion of the waterway during which it test-fired missiles.

Little made it clear that the flotilla would not be deterred from returning, saying that transits of U.S. Navy ships through the strait “continue to be in compliance with international law.”

The Stennis strike group would be operating “under international maritime conventions to maintain a constant state of high vigilance in order to ensure the continued, safe flow of maritime traffic in waterways critical to global commerce,” he said.

Iran finds itself squeezed as never before, with the European Union preparing to sanction Iranian oil and new U.S. congressional sanctions passed late last year threatening to hit its central bank, which handles much of the financing for Iran’s oil transactions.

“Things have changed. The countries that actually get oil from Iran in Europe have new governments that are prepared to take a harder line,” Bremmer said.

Spain has a new conservative government willing to take a tougher approach with Iran, he said, and technocrats now run Italy and Greece, two troubled European economies that have imported Iranian oil. The technocrat leaders are more likely to follow EU directives from Brussels.