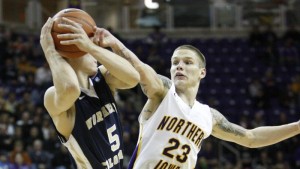 CEDAR FALLS, Iowa – Evansville used 29 second-half points from Colt Ryan to extend the University of Northern Iowa’s losing skid to three in a row with a 76-65 victory in the McLeod Center on Sunday night.

UNI held a 27-21 lead at the half, but surrendered 55 second-half points to fall to 10-4 on the year and 0-2 in Missouri Valley Conference play. Evansville moved to 7-5 overall and 2-0 in league action.

The Panthers were led by freshman Seth Tuttle career-high tying 16 points and 10 rebounds. It was Tuttle’s second double-double as a collegian. Junior Marc Sonnen made his first start of the season, second of his career, and tallied a season-high 14 points before fouling out with just under two minutes to play. Freshman Deon Mitchellcontributed 14 points off the bench.

The Panthers led 22-8 following back-to-back three-pointers from Sonnen and senior guard Johnny Moran with 10:01 remaining in the first half. But the Purple Aces responded on the defensive end as Kenny Harris tallied two straight steals and dunks to make it 22-12 with 7:00 left in the half.

UNI maintained its six-point lead into the first media timeout of the second half after a Tuttle bucket made it 34-28 with 15:48 left in the game. However, Evansville secured an 11-2 run to take a 39-36 lead – a run which was finished off by a pair of Ned Cox baskets off transition.

Tuttle banked in a 3-pointer with 11:08 to knot the game at 39-39. After Jake Koch made one of two free throws with 9;25 left the game was again tied at 43-43. The 43-43 tie proved to be the final deadlock of the contest as Evansville took the lead and did not relinquish the lead the rest of the way.

UNI got to within three points at 60-57 with 1:45 left on a triple from Moran. But Evansville made all 16 free throws it attempted in the final two minutes.

The Panthers will play host to the Indiana State Sycamores on Wednesday at 7 p.m. in the McLeod Center. The game will be broadcast live on the Panther Sports Television Network.