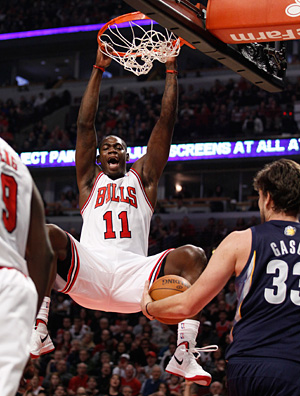 Combine the two, as the Bulls did Sunday night at United Center thanks to the lockout-induced delay, and anything felt possible.

(PHOTO: Chicago Bulls shooting guard Ronnie Brewer (11) dunks in front of Memphis Grizzlies center Marc Gasol (33) during the first half of their game at the United Center in Chicago, Illinois, on Sunday, January 1, 2012.)

Which might be why, with the Grizzlies showing little resistance in a 104-64 loss, one of the night’s biggest cheers came from the pregame video montage showing last season’s highlights. Those included, of course, that elephant in the room, the Heat.

Establishing a strong homecourt advantage for a team that went 36-5 at United Center last season could aid in the Bulls’ quest to beat the Heat and advance to the NBA Finals. They took the first step toward the former with an effort that featured 17 points and 11 rebounds from Carlos Boozer, 16 points and six assists from Derrick Rose.

“You always want to play tough at home,” coach Tom Thibodeau said. “The things that go into winning are always the same. Defense, rebounding, keeping turnovers down, inside-out, share the ball.”

About the only downers came when C. J. Watson left late in the third with a left elbow injury that looked ugly after he crashed to the floor pursuing a loose ball. And Richard Hamilton sat as a late scratch with a sore groin. He’s day-to-day.

The defense aided the Bulls’ push-the-ball mentality throughout as they led by as many as 46. Boozer, whose parents attended, also helped, posting his second double-double on the young season.

“He’s making the right plays,” Thibodeau said. “That’s what I want him to do. If you cut, he’ll hit you. If the ball comes back to him, it’s shot, high-low, quick swing.”

January is the Bulls’ busiest month with 19 games in 31 days. This includes their only back-to-back-to-back scenario, which comes next week, and one brutal stretch of nine games in 12 days. This is where the team’s depth could thrive.

“We have a lot of weapons,” Rose said. “And we have shooters now. Different people are stepping up on different nights.”

Not until Sam Young scored with 1 minute, 10 seconds remaining did somebody crack double figures for the Grizzlies, who played without Zach Randolph for the final three quarters. Randolph suffered a right knee contusion when O.J. Mayo crashed into him.

Is it coincidence that stretch coincides with Rose’s arrival in 2008? Probably not since that blessing signaled the biggest new beginning of all.