Last US base in Iraq prepares to turn out the lights 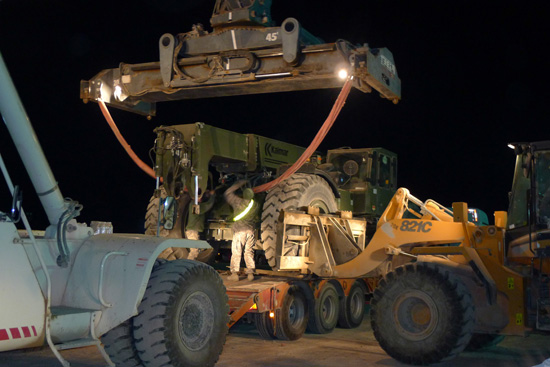 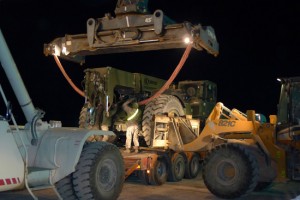 CAMP ADDER, Iraq — The young Army officer who’s in charge of logistics at the last U.S. base in Iraq is a Sudanese refugee, one of the “lost boys” who fled their war-ravaged homeland in the mid-1990s.

(PHOTO: With the help of a “T-Rex” container stacker and a forklift, SSG Jerrod Keune of Abilene, Kansas, moved a giant Kalmar container lifter onto a trailer for departure from Iraq to Kuwait.)

His staff sergeant survived a deadly improvised-explosives attack during his third tour here in 2005, then returned for two more.

When they and the five other members of their team process the final load of equipment from what was once a network of more than 500 American bases, the nearly nine-year U.S. occupation and military presence in Iraq will be history.

“We are the ones that are going to sort of turn out the lights and close out Iraq,” said Capt. David Moses, 30, who was born in South Sudan and fled the civil war there as an adolescent, eventually landing in Utah.

If Moses’ journey from his homeland was amazing on a human scale, American forces’ exodus from Iraq is amazing in a different way. The military has designated the undertaking “Nickel II” and called it the biggest logistical operation since World War II’s Battle of the Bulge, which was code-named “Nickel.”

From March to October, upward of 1,000 trailers carrying tanks, armored personnel carriers and containers passed daily through this sprawling desert base for a final inspection of the equipment and accompanying papers before being dispatched the additional 250 miles to Kuwait to be loaded onto ships. The precision required to keep the transports rolling without delays is impressive.

Now Moses’ logistics team is down to about 50 truckloads a day, and its members said they were at least a day ahead of schedule. Moses, who’s on his third tour of Iraq and has two Bronze Stars for service, said the plan he was operating from was as sophisticated as “brain laser surgery.”

At Baghdad airport Thursday, Defense Secretary Leon Panetta presided over the ceremonial “casing” of the flag of U.S. forces in Iraq, signifying the official end of the war.

“The dream of an independent and sovereign Iraq is now a reality,” Panetta said. He predicted that Iraq would be tested in coming days by terrorism and by those who seek to divide the country, but he predicted: “Your children will have a better future.”
Seats at the event were reserved for Prime Minister Nouri al-Maliki, who’d been in Washington through Wednesday, and President Jalal Talabani, but neither showed up in what had been the U.S. Victory Base Complex.

In Fallujah in Anbar province, the scene of some of the fiercest resistance to the American-led intervention early in the war, several thousand Iraqis gathered at the “martyrs’ cemetery,” many holding photographs of their sons, brothers and fathers who’d died fighting U.S. forces.
“I am here to remember my brother Hamid and his heroism,” said Hamed Owayid, who’s 33. “I am happy that the American forces have left. They left defeated, never to return again, God willing.”
On Wednesday, thousands had gathered in the city for speeches and poems about the fighters of Fallujah, whose most notorious act against the U.S.-led occupation was the ambush and savage execution of four American security contractors in March 2004.

Camp Adder, near the town of Nasiriyah, has long been the staging point for convoys heading in and out of the country. Logistics, as practiced here, lacks the glamour of combat, but on occasion it offers up a dramatic moment that can grip anyone who has fond memories of playing with toy trucks as a child.

Moses and his staff sergeant, Jerrod Keune, who are with the 624th Movement Control Team, 39th Transportation Battalion, 16th Sustainment Brigade, based in Ramstein, Germany, were doing a routine tour of the vehicle marshaling yard at 10 p.m. Tuesday when they spotted an enormous Kalmar container lift sitting off-kilter on a flatbed trailer.

The Kalmar, weighing some 50 tons, has four-wheel steering, but only two were working, and if the trailer went on the road with it in that position and rounded a curve, that could well tip the flatbed over. The Kalmar is colossal, with each of its wheels 7 feet high.

Keune (pronounced Cuney), 39, of Abilene, Kan., quickly improvised a plan to put it right. He directed two operators of an even bigger shipping-container lift, known as a Terex, to strap down the rear part of the Kalmar and lift it slightly off the flatbed. He then climbed onto a huge forklift and nudged the rear part the 8 or so inches needed.

The two drivers of the “T-Rex,” as it’s nicknamed, repeated the operation at the front of the Kalmar, and Keune used his forklift to nudge it precisely the distance (8 inches) needed to be centered. Mission accomplished.

They’ve had other crises. There was the driver of a refrigerator truck who tried to refuel the cooling generator, spilled gasoline down his back and then inadvertently set himself on fire. They put it out, and took him to the hospital, where he recovered.

“The vehicle was burned almost beyond recognition,” Moses said. But the contents, frozen steak and pork chops, were “good to go.”

Drivers — who are from India, Nepal, Pakistan and other countries — have attacked each other, resulting in ban on knives. They’ve found people hiding in the vehicles, trying to get onto the base to find a job. They’ve also found drugs, money and bomb parts. And at least one driver had a heart attack while transiting Adder.

But well before Adder, Keune and Moses had encountered bigger drama in their own lives.

Keune was a cavalry scout on a motorized patrol near Baghdad airport in the middle of the night in July 2005 when the lead vehicle drove over what looked like a cigarette pack in the road and triggered a massive explosion.

“There were 75 122-millimeter artillery rounds, daisy-chained together. They had 25 on the right shoulder, 25 on the left shoulder and 25 on a bridge support,” he recalled.

The bridge collapsed and crushed the first Humvee “like a tuna can,” killing four people. The explosion blew off the front half of Keune’s Humvee, killing the driver and a private who’d been sitting in the front seat.

Keune was riding in the turret, having switched places with the private at the latter’s request. “If I hadn’t switched with him, no, we wouldn’t be standing here doing this interview,” he told a reporter. “That would have been me in his spot.”

That explosion, he said, is how he became a logistician. It broke both collarbones, cracked his sternum and shattered his right leg from the knee down. His rebuilt leg has two titanium rods running through it, tendons taken from a dead person to provide the ligaments, 12 bone anchors and four screws. He always triggers alarms at airport magnetometers.

Keune, who’s received a Meritorious Service Medal and an Army Commendation Medal, was designated to receive a Purple Heart, but he said he had yet to receive it.

Moses’ story is every bit as extraordinary.

Together with thousands of adolescent boys, he was inducted as a child soldier in the South Sudanese resistance movement, the Sudan People’s Liberation Army, fighting the Arab-controlled Sudan government.

“We were brainwashed. We didn’t know any better. We were kids,” he said.

To escape Sudan, he and other 12- and 13-year-olds crossed deserts, jungles and rivers before they landed in a United Nations refugee camp in northern Kenya. Offered the chance to immigrate to the United States, he quickly agreed.

First he was placed with a Sudanese family in South Dakota who insisted that he go to work, and he ended up at a meatpacking plant. Again, he got lucky, and was offered the chance to complete a high school diploma in Utah through Job Corps, a vocational training program administered by the federal Department of Labor. He won an academic scholarship to Weber State University in Ogden, Utah, and went into the Reserve Officers’ Training Corps.

Through yet another bit of good luck, he met Wanda Berkes, the wife of National Public Radio correspondent Howard Berkes, who took him on as their charge.

Moses said he immediately felt at home in the Army. His father had been in the Sudan People’s Liberation Army, and he knew the military life. “I’ve been a soldier since I was a kid,” he said. “That’s my life. That’s my destiny.”

He had skills that few soldiers had, among them being able to read and write Arabic. On his first tour in Iraq as a platoon leader, in 2003-04, he was a “door-kicker,” “but I also had a connection with the Iraqi children of war. Some of my soldiers didn’t understand that.”

On his second tour, during the surge of U.S. troops in 2007-08, he was a military adviser to the Iraqi army, which at the end named him an honorary commander.
As for his past, he said: “I may have qualified as a ‘lost boy,’ but I am not anymore.”