Tebow pulls off his weekly miracle 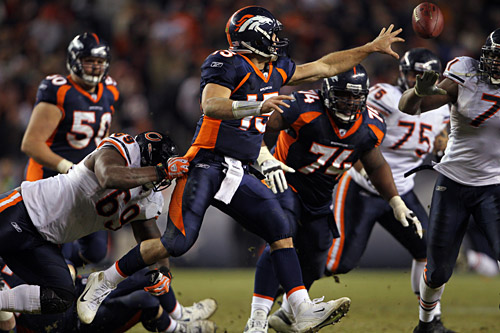 LOS ANGELES — Week by week, the football world is learning something about the new quarterback of the Denver Broncos.

Tebow ends with a W.

The magic happened again Sunday in breathtaking fashion as Tim Tebow guided his team to another overtime victory — Denver’s third in Tebow’s eight starts — 13-10 over Chicago at Invesco Field.

(PHOTO: Denver Broncos quarterback Tim Tebow (15) gets a shovel pass off under pressure from Chicago Bears defensive tackle Henry Melton (69) in overtime at Mile High Stadium in Denver, Colorado, on Sunday, December 11, 2011. The Broncos defeated the Bears, 13-10 in overtime.)

When is the stunning no longer surprising?

When is the unbelievable almost expected?

It’s happening just about every week for the Broncos, who are 7-1 since promoting Tebow to the starting job in mid-October, have won six in a row, and trailed at the two-minute warning in each of their last four wins — against the Jets, Chargers, Vikings and Bears.

On a day of eyebrow-raising outcomes — Arizona upsetting San Francisco, Houston finally securing its first playoff berth, and the Raiders getting rolled in Green Bay — Denver typically came to life late in the game.
Through the first three quarters Sunday, Tebow completed three of 16 passes. In the fourth quarter and overtime, he was 18 for 24.

“It looked pretty bleak there for a while,” Tebow said.

“We kept believing. I feel like I’m saying similar things every week, but we’re just believing and fighting to the very end.”

Tebow has provided the NFL’s most entertaining and dramatic theater, and that includes the Packers’ spectacular run at perfection. Still, he seems to be the focus of the sports world’s most rigorous job interview, as there’s no definitive word whether the Broncos’ brass plans to build the franchise around him for the long haul.

History will chalk this up as another example of “Tebow Time,” but this game also hinged on two huge kicks by Denver’s Matt Prater, and two massive mistakes by Chicago’s Marion Barber.

Prater forced overtime with a 59-yard field goal, and won the game with a 51-yarder.

The Bears would have been able to burn almost all of the clock at the end of regulation had Barber not run out of bounds. And it was his lost fumble in overtime that set up the winning field goal.

“This is an instant classic,” Broncos receiver Eric Decker said. “It classifies as that. It’s a game you don’t see often at all. Probably again … we’re finding ways. I can’t really explain how we’re doing it, we’re just doing it.”

Denver stands to become the seventh team to make the playoffs after starting 1-4. With three weeks to go, the Broncos pulled a game ahead of Oakland in the AFC West, thanks to the Raiders’ non-competitive showing in a 46-16 loss at Lambeau Field.

The Broncos finish against New England, at Buffalo, and vs. Kansas City. The Raiders play Detroit, at Kansas City, and San Diego. And the Chargers, who kept their flickering playoff hopes alive Sunday with a 37-10 win over the Bills, close with Baltimore at home, then road games at Detroit and Oakland.

His nickname, “Gronk,” sounds like a Dr. Seuss character, but New England’s Rob Gronkowski has made his way into another type of book. He now has 15 receiving touchdowns, the most ever by a tight end in a single season. He reached that milestone at Washington on Sunday with two touchdowns, reeling in six catches for 160 yards.

His 14th touchdown moved him ahead of San Diego’s Antonio Gates (2004) and San Francisco’s Vernon Davis (2009), giving him the league record.

In his two NFL seasons, Gronkowski has 25 receiving touchdowns in 29 games. Only four other players in NFL history have accomplished that: Bill Groman (24 games), Lance Alworth (27), Bob Hayes (27) and Randy Moss (29).

THE STRING KEEPS PLAYING OUT

The standings say they’re 13-0, but the Green Bay Packers have actually won their last 19 games. That’s the second-longest winning streak in NFL history to New England’s 21-game string in 2003-04. By beating Oakland, the Packers clinched a first-round bye, and their 46 points gave them a franchise-high 466 for the season.

Standing between them and 16-0 is a game at Kansas City, then home games against Chicago and Detroit.
Sunday wasn’t all good for the Packers, though. Star receiver Greg Jennings left the game in the third quarter with an apparent injury to his left knee.

“Well, it didn’t look very good,” quarterback Aaron Rodgers said. “So we’ll see what the MRI says tomorrow. And hopefully, we’ve got a bye wrapped up, so he really has close to five weeks before our (first playoff) game.”

The crowds are dwindling in Cincinnati, and so are the playoff hopes of the Bengals. The announced attendance of 41,202 for Sunday’s game against Houston was the second-smallest crowd in Paul Brown Stadium history. The Bengals, once in the thick of the AFC North race, have lost three of four.

The Texans, meanwhile, secured their first ticket to the postseason by virtue of their 20-19 win, and Tennessee’s loss to New Orleans.

It was rookie quarterback T.J. Yates, a fifth-round pick from North Carolina, who led the Texans to victory.

“A rookie quarterback beat us today,” he said. “He did it with both his arms and his feet. I don’t even know what to say. Wow.”

TAKING ANOTHER STAB AT IT

Cardinals coach Ken Whisenhunt used that occasion to scold reporters after the game.

“You guys stuck a fork in us quite a while ago,” he said. “I think our guys never let it get to them. How many times during those first weeks did we say that we were going to stay the course and that it was going to turn for us? We believed it.”

Atlanta, Jacksonville, Houston and Arizona came back to win games Sunday in which they trailed by at least a dozen points. It was the second time this season four teams have done that on the same Sunday, the first being Sept. 18. That’s the most such days in a season since 1984.

WHO WAS THAT MASK MAN?

Instead, the Lions got away with a clear infraction on the final play of a 34-28 victory at home. Just after Webb fumbled at the one, a yard away from the potential winning touchdown, Lions linebacker DeAndre Levy pulled on his face mask. There was no flag on the play.

Rationalized Levy: “We get a lot of calls called against us. So, they owed us one if I did.”

PICKING ON (AND OFF) RAIDERS

In the last two weeks, the Raiders have suffered disheartening road losses at Miami and Green Bay.
The Packers picked off four Carson Palmer passes.

“I’m not going to let this team keep going backward,” Raiders coach Hue Jackson said. “The last two weeks, we haven’t come close to playing or looking like the football team we’ve been.”

The Raiders were flagged 11 times for 89 yards at Green Bay, a week after drawing 10 penalties for 91 yards against the Dolphins.

“You are not going to beat a high school team with the penalties and mistakes (like) the ones that we made,” linebacker Aaron Curry said. “You make a lot of mistakes, you lose.”

Drew Brees joined Hall of Famer Johnny Unitas as the only quarterbacks to throw a touchdown pass in 40 consecutive games.

New England won at Washington for the first time in franchise history.

Bears-Broncos was only the second game this season that was scoreless at the half. The first was Giants-Patriots on Nov. 6, a game New York won, 24-20.

For the first time in NFL history, there are three quarterbacks with at least 4,000 yards passing through Week 14: Brees, Rodgers, Tom Brady and Eli Manning.