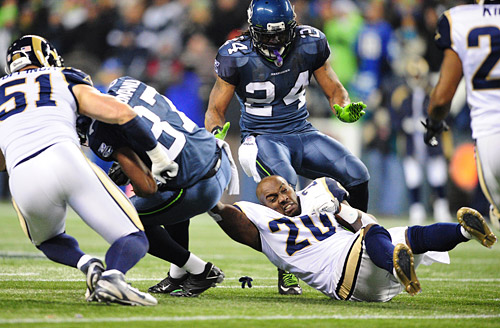 By Danny O’Neil, The Seattle Times

SEATTLE — The Seahawks started the game by running a reverse on the opening kickoff, Leon Washington handing the ball to Doug Baldwin.

(PHOTO: St. Louis Rams safety Darian Stewart, bottom without helmet, tries to bring down Seattle Seahawks wide receiver Ben Obomanu during a play in the first half at CenturyLink Field on Monday, Dec. 12, 2011, in Seattle, Washington.)

But that was as fancy as Seattle got in its return to “Monday Night Football.” There was no razzle and very little dazzle to its 30-13 victory over the St. Louis Rams at CenturyLink Field.

The Seahawks’ victory was simple, straightforward and unrelenting. Kind of like Marshawn Lynch’s 16-yard touchdown run to close out the game in the fourth quarter.

“We’ve played the same for a while now,” coach Pete Carroll said.

It’s a formula that’s both predictable and productive.

Start by handing the ball to Lynch. The Seahawks did that 23 times on Monday night for 115 yards.

Throw in the occasional handful of Skittles that Lynch gets after every touchdown.

Bank on a defense that’s about as forgiving as the Old Testament. The Seahawks did just that, holding Rams running back Steven Jackson to fewer than 100 yards in a game for the eighth consecutive year. St. Louis didn’t score a touchdown until the fourth quarter when it was down 17.

Throw in a couple big special-teams plays, and Seattle had its fourth victory in its past five games.

“Really, really pleased about the style of play,” Carroll said. “You can see what we’re trying to get done here, and it’s obvious what we’re emphasizing and the guys are responding.”

The rest of the country saw that Monday night. Well, at least those in the television audience who stopped cringing after a first half in which the two offenses threatened to set football back a couple of years.

Baldwin’s blocked punt set up the only touchdown for either team, with fullback Michael Robinson scooping up the ball and returning it 17 yards.

The jokes stopped somewhere in the third quarter. That’s about the time the offensive eyesore that was the first half gave way to a victory about as one-sided as the series between the Seahawks and Rams has become.

Lynch gained 87 of his 115 yards in the second half. Baldwin scored on a 29-yard touchdown pass in the third quarter. And Seattle, playing like the double-digit favorite it was, never let St. Louis (2-11) get closer than seven points in the second half of a paint-by-numbers whupping.

“Guys were flying around, which is fun,” said safety Earl Thomas. “We were having fun. ‘Monday Night Football,’ prime time, it was a fun game.”

The stage was bigger with the game televised by ESPN, the lights perhaps a little brighter, but the one thing that didn’t change was Seattle’s approach.

“It don’t make no nevermind whether you’re playing on Monday, Sunday, Tuesday, Wednesday or in the backyard,” cornerback Richard Sherman said.

But this was the same formula the Seahawks have used to resuscitate a season in which they were 2-6 at the halfway point. On Monday, it resulted in a victory that was as lopsided as expected, a win over the Rams that put Seattle at the edge of playoff consideration.