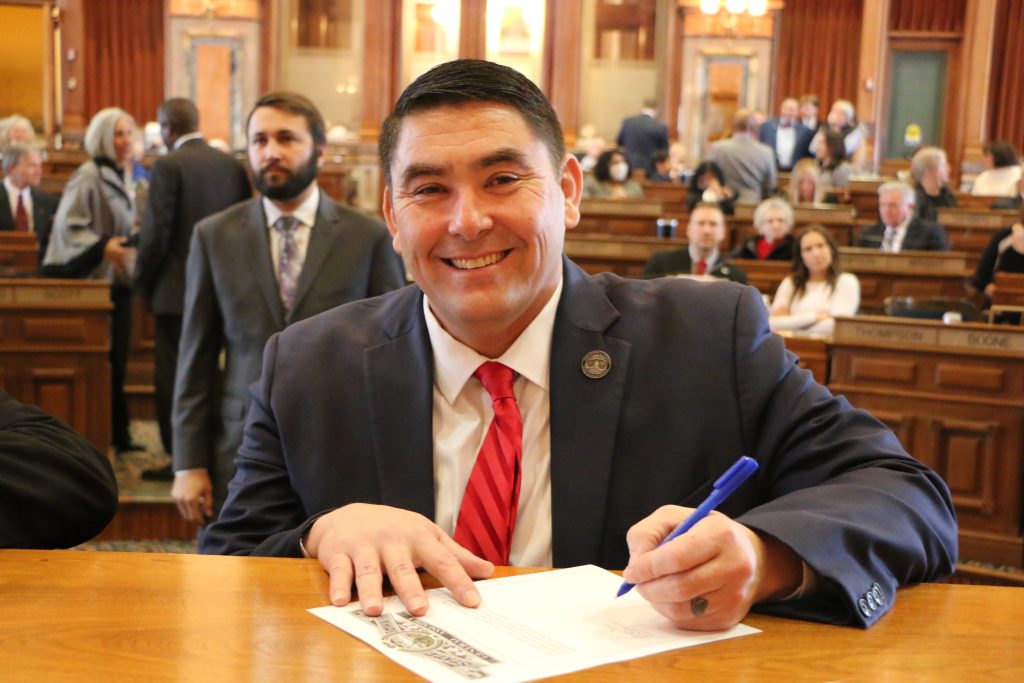 The following is a legislative update from Republican Representative Henry Stone of Forest City, representing portions of Emmet, Kossuth and Winnebago counties in Iowa House District 7:

The following is a legislative update from Republican Representative Henry Stone of Forest City, representing portions of Emmet, Kossuth and Winnebago counties in Iowa House District 7: 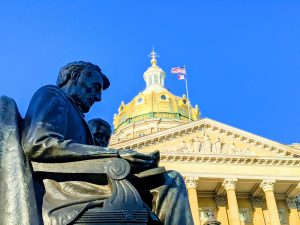 Week 1 is in the books, and the 90th General Assembly is well underway. It has been a busy week full of meetings and committees. This year I am on the following committees: Administration and Rules, Appropriations, Education, Ethics, Judiciary, and the Economic Development Appropriations Subcommittee. I also have the great honor of being selected to be the new Majority Whip. This is a role I am very excited to step into and fulfill.

Being able to listen to the Governor give her Condition of the State address was the highlight of this first week.  She laid out a bold agenda that supports many different aspects of what I heard from people here in the district and what many of my fellow colleagues heard from constituents around the state.

Here is a look at some of the things happening in the House of Representatives:
Governor Releases FY 2024 Budget Proposal

Governor Kim Reynolds unveiled her plan for state spending in Fiscal Year 2024 as part of Condition of the State address on Tuesday.  The Governor called for state General Funding spending to increase to $8.4866 billion starting July 1.  This is an increase of 3.3 percent and has the state spend just 88.17 percent of on-going tax revenue.

The vast majority of the increased funding in the proposed budget goes to K-12 education.  The largest portion goes to the proposed Educational Savings Accounts, which receives $106.9 million in its first year of operation.  For Supplemental State Aid, the Governor is recommending an increase of 2.5 percent.  This increases school funding by $82.8 million.  The Governor extends the 2.5 percent raise in spending to state universities, community colleges, the School for the Deaf, educational services for the blind, and the Iowa Tuition Grant program.

Funding for the largest agency in state government – the newly merged Department of Health and Human Services –sees a slight increase in the next fiscal year.  Leading the changes is a $15 million increase for Medicaid, with the new funds designated for increasing reimbursement rates for nursing homes by that amount.  No other Medicaid provider group receives a rate increase under the Governor’s proposal.

The state’s judicial and public safety programs see increases in funds, although a sizeable portion of the funding hike is the transfer of some programs.  The Judicial Branch gets an additional $18 million, but $14.5 million of that is the transfer of two juvenile justice programs.  The transfer of these programs was mandated by Congress, as part of changes to child welfare and juvenile justice programs being imposed on states.  The Iowa Highway Patrol’s budget grows by $15.6 million, but most of this is due to the Governor’s proposal to move Motor Vehicle Enforcement from the Dept. of Transportation (with funding coming from the Road Use Tax Fund) to the Dept. of Public Safety and the General Fund.  Iowa’s correctional facilities receive an increase of $13.3 million.

Funding on infrastructure projects will be significantly lower in Fiscal Year 2024, as the amount of available dollars in the Rebuild Iowa Infrastructure Fund returns to a more normal level.  The Governor’s proposal spends $216.7 million in RIIF (down from last year’s record level of $292 million).  Many of the increases approved last year in on-going RIIF programs like CAT grants and state park maintenance are maintained.  The proposal creates one new multi-year commitment, with the Governor proposing the state provide $20 million over the next two years for additional facilities to be added to the Veterinary Diagnostic Lab which is currently under construction.

The release of the Governor’s budget also provides a fairly extensive preview of the government reorganization bill that was announced during the Condition of the State speech.  Many line items are proposed to be moved to different agencies.  This includes the College Student Aid Commission, whose mission and programs are transferred to the Department of Education.

The Governor’s budget announcement is a vast difference from what some states are experiencing this week.  The Iowa budget will spend 88.17 percent of the available revenue in Fiscal Year 2024.  This would leave Iowa with a projected ending balance almost $2 billion –an amount equal to 23.5 percent of the actual budget.

That is a world away from the budget disaster that California Governor Gavin Newsom revealed in his budget address.  Thanks to out of control spending, oppressive tax policy and general incompetence, California has gone from a $100 billion surplus last May to staring down the barrel of a $22.5 billion deficit in the next budget year. It is amazing what a common-sense, conservative approach to budgeting and pro-growth tax policy will do for a state’s bottom line.
Governor Reynolds Outlines Education Savings Accounts

Within the Governor’s speech on Tuesday she discussed her education plans. The number one issue is school choice. Governor Reynolds’ Student First Act will set up an Education Savings Account (ESA) Program. For parents who choose to enroll their children in an accredited private school, they will receive $7,598, which is the amount of per pupil funds allocated annually by the state, to use for tuition, fees, textbooks, tutoring, curriculum or material costs, online education programs, vocational or life skills training, standardized test fees, and educational services for students with disabilities.

Funds will be deposited into an ESA each year until students graduate or turn 20 years of age, whichever is sooner. At that time, all remaining balances are returned to the state general fund.

Here is the eligibility breakdown:

Other student funding generated by the per pupil categorical funding formulas will remain with the respective public school district, even though a student has moved to a nonpublic school. This will be new funding that they have never been able to receive before. It is estimated that a public school district will retain about $1,205 per pupil in categorical funding for each student who attends a private school from their district. 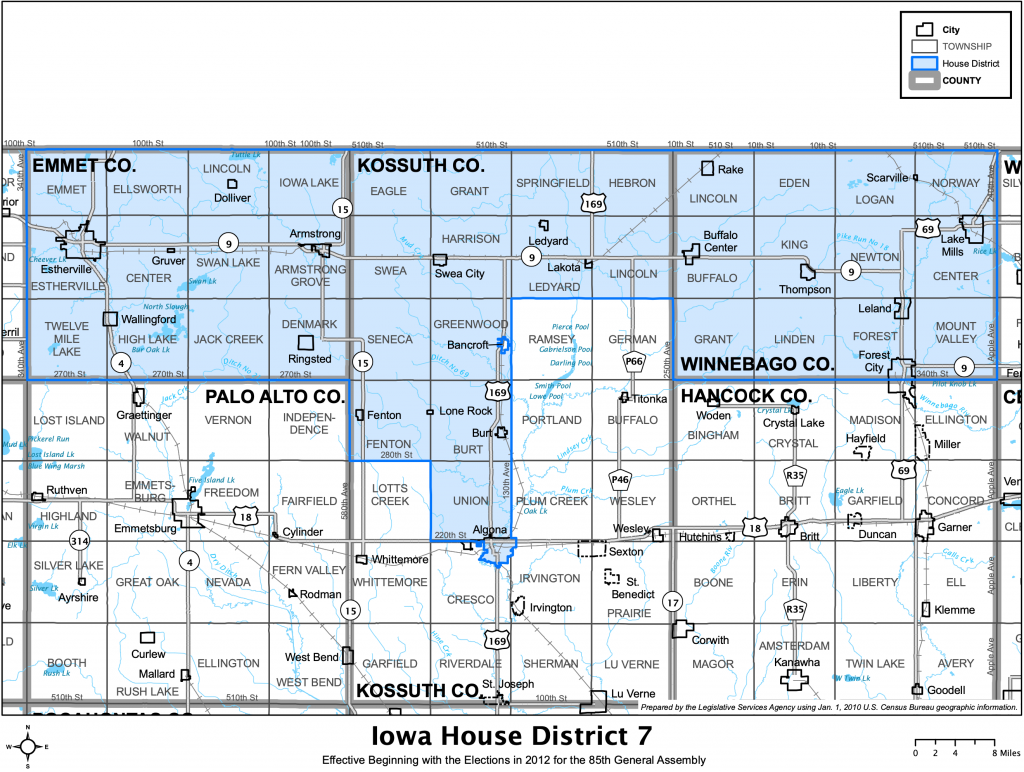