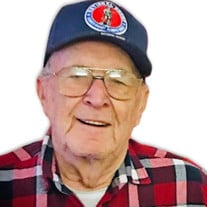 Duane A. Polsdofer Sr., 89 of Rockwell passed away November 5, 2022 at MercyOne North Iowa Hospice Inpatient Unit with family at his side.

Duane A. Polsdofer Sr., 89 of Rockwell passed away November 5, 2022 at MercyOne North Iowa Hospice Inpatient Unit with family at his side.

Funeral Services will be held 10:30 a.m. Wednesday, November 9, 2022 at Rockwell United Methodist Church, 303 Madison Street, Rockwell with Rev. Wendy Johannesen and Rev. Matthew Polsdofer officiating. He will be laid to rest at Rockwell Cemetery beside his wife, Joan.

Visitation and public viewing will be held from 5:00 p.m. to 7:00 p.m. Tuesday, November 8, 2022 at Hogan-Bremer-Moore Colonial Chapel, 126 3rd St. NE, Mason City. Visitation will continue one hour prior to the service at church.

Memorials may be directed to Rockwell United Methodist Church.

Duane Arthur Polsdofer was born July 12, 1933 south of Swaledale to Arthur Charles and Ella (Trana) Polsdofer. In 1951 he began his honorable service in the United States Army. On October 28, 1963 he married the love of his life, Joan at the Rockwell United Methodist Church. Duane drove semi for Ziesmer and later Stockberger Transfer for over 30 years before retiring in 1985. Retirement didn’t last long, and Duane drove for Ruan and Rex Liekweg over the years. His many years in the semi taught him that anything could be fixed with a few bungee cords, some wire, and just a bit of duct tape.

Duane was a longtime member of Rockwell United Methodist Church where he cared for the grounds as well as served as the janitor for many years. He served as a Confirmation mentor, helping to instill faith and hope in the upcoming youth. If you knew Duane, you knew he was always on the go. His bountiful garden seemed to get just a bit bigger each year and he shared his harvest with friends and neighbors. Duane never missed the Draft Horse Show in Britt and looked forward to trips with the family. Each day was a chance to get out on his bike for his daily rides and he never turned down an afternoon sledding with the kids. Whether it was events with his siblings, time with his children, running around with his grandchildren and great grandchildren, or their naps on the lawnmowers’ ‘extra’ seat he built, his family brought him so much joy. His loving nicknames for each of them will be cherished for years to come.