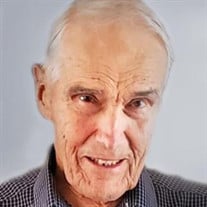 Ernie Gales, 93, died on Tuesday morning, Oct. 25, 2022, at Good Samaritan Society care center in Algona, Iowa, due to complications of Covid-19. Mass of Christian Burial will take place at 10:30 a.m. Saturday, Oct. 29, at Divine Mercy Parish – St. Joseph Catholic Church in St. Joe, with Rev. Merle Kollasch and Rev. John Thomas officiating. Mass will be live streamed via this link : https://www.hdezwebcast.com/show/ernest-gales. Burial will be in St. Joseph Catholic Cemetery. Visitation will be 4–7 p.m. Friday, Oct. 28, at the church with a 3:45 p.m. Knights of Columbus Rosary and a 7:00 p.m. Scripture Service.

Ernest Mathias Gales, son of Ernest J. and Veronica Dockendorf Gales, was born on Jan. 3, 1929, on the family farm up the hill just west of St. Joe. He attended St. Joseph School, serving as senior class president and graduating in 1946. He and brother Romie played on the school baseball and basketball teams.

Ernie worked on the family farm before marrying classmate Helen Bormann on Feb. 19, 1952, in St. Joe. They farmed four miles east of St. Joe for 50 years before retiring in 2001 in St. Joe, where their home stood next to the former site of a general store run by Ernie’s grandfather, Nicholas Gales.

Ernie and Helen raised six daughters and three sons. Ardent supporters of Catholic education, they sent all their children to Catholic colleges and universities.

In addition to raising corn and soybeans on over 500 acres, Ernie operated a custom corn shelling and hauling business from the 1950s until the 1980s. Starting in the 1960s, he also ran a custom combining business for many years. These businesses created unique opportunities for Ernie and his sons to interact with area farm families and for Ernie to refine his knack for keeping dilapidated machinery operating well beyond its normal shelf life.

An active and devout St. Joe parishioner, he was a member of the Knights of Columbus and served a term as grand knight. He was a parish director in the 1970s and served on the school board and parish council. He was an invaluable volunteer for parish activities.

Ernie and Helen were instrumental in initiating a project to compile a comprehensive parish history, and then helped produce the 384-page “Saint Joseph Parish 1876-1976,” a valued reference work to this day. Their work on the book continued a deep interest in family history that took the couple to Luxembourg several times to tour ancestral farmlands and visit newly-discovered relatives. In 2018 Ernie proudly reclaimed Luxembourg citizenship.

Ernie’s sharp memory and interest in local history made him a valuable resource for anyone wanting to learn about family connections and relationships—and willing to make time to listen! This continued through his final days at the nursing home.

Ernie started taking pictures after retirement and enjoyed gifting photos to those whose farms were the settings for his images. He digitized pictures from the “old days,” and many a visitor sat near his computer for a session viewing photos and absorbing knowledge. He embraced computer technology and spent hours enjoying emails, YouTube, FreeCell, and Google Earth.

Ernie kept a diary starting around 1960, detailing corn shelling jobs, high and low temperatures, family activities, and more. His last entry was Sept. 19—just two days before he went to the hospital due to his final illness. The diaries are a treasured family resource.

In later years Ernie was a regular visitor at local care centers. During his short stay at Good Samaritan he continued to check on friends and relatives there.

Survivors will remember the strong Catholic values, family loyalty, and work ethic that Ernie exhibited every day of his life, as well as his unique knowledge of and devotion to the St. Joe community. His grandchildren will remember tractor rides with grandpa and his St. Joe stories. Among his children’s memories are his too-chirpy early-morning calls to rise and shine (and get to work), often including an inspiring rendition of “Oh, What A Beautiful Mornin’.”

A young grandson once called Ernie “the most original man” he knew. A local legend, Ernie became a continually-updated, living embodiment of the history book he did so much to create. He will not be replaced.

Contributions in Ernie’s memory may be made to Catholic Charities of the Diocese of Sioux City and Knights of Columbus Charitable Foundation.