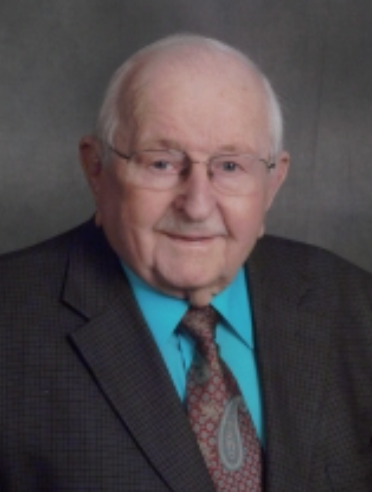 Merle E. Hendrikson, 93 of Mason City, IA, passed away on Monday, September 12, 2022, at MercyOne Medical Center – North Iowa. His attempts to fight off a recent illness peacefully ended while surrounded by the love and presence of his family and close friend Linda Huegli.

Merle Eugene Hendrikson was born in rural Worth County on June 29, 1929, the son of Pearl O. and Judith (Carlson) Hendrikson. Merle married Geneva (Brones) on June 19, 1953. To this union, five children were born, Ron, Brian, Kevin, Beth and Mark.

Merle Graduated from Northwood High School Class of 1947. He drove straight truck for his dad worked at Gildner’s and the local Northwood Creamery. He was drafted into the US Army in 1951 and honorably discharged in 1953. He faithfully served his country during the Korean Conflict. After his service and duty to country he quickly found employment with Northwestern Bell as a lineman and retired at age 54 as an underground cable splicing Foreman. After retirement he worked with various contractors and engineering firms installing fiber optic cable, land acquisitions, pipeline and power line easements.

Merle was a longtime member of Trinity Lutheran Church serving on various boards and committees. He ushered for close to 50 years, taught Sunday school and experienced many Boundary Water canoe trips with the Trinity youth. He would occasionally stop by the church providing treats, wisdom and laughter as a means to keep himself involved. He was active in Scouting at all levels serving as Troop 14 Scout Master for a number of years. He mentored his sons and numerous other neighborhood boys guiding several to the ranks of Eagle Scout. Again, leading scouts to the Boundary Waters and numerous week long camping trips to Winnebago Council Campground near Marble Rock, IA. Family reunions were a high priority no matter the distance or which side of the family tree. His greatest passion outside of his faith and family was the lifelong friendships with the AT&M Platoon, 110th INF-28th DIV. They faithfully served each other by gathering every other year at different locations throughout the continental United States. His family embraced the AT&M legacy and eagerly looked forward to the next vacation destination. He often got sidetracked when traveling through large cities exposing his family to those that had far less food, clothing and shelter. He was a “Thinker” when it came to problem solving and eventually came up with a practical solution. He had a silent way of expressing gratitude and appreciation. No better than, no less than, humble, God loving, man.