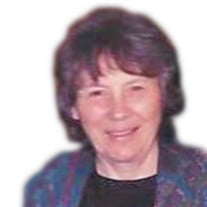 Grace’s family will greet relatives and friends beginning one hour prior to her service at the funeral home.

The daughter of Frank D. and Margreta H. (Ebbinga) Haberman, Henrietta Grace Peterson was born October 26, 1927 in Slayton, MN. She grew up in Avoca, MN where she lived until moving to Rochester, MN in 1943.

While living in Rochester she met Temen Benford Peterson and together the couple moved to Chicago, IL where they were united in marriage. They would be blessed with three children, Gale Temen, Pamela Grace, and Verlene Olive.

The young family resided in Chicago from 1946 until 1952 when they moved to Iowa City, IA where they lived for two years before settling on a farm in Temen’s hometown of Kendallville, IA.

In 1963 Grace and Temen made one final move, settling in Clear Lake where they would raise their children before eventually divorcing.

Grace was a talented seamstress and completed countless alterations over the years. She loved time spent outdoors and will be remembered for her flower and vegetable gardens. Many spring and fall days were spent in the tactor helping Gale in the field, she also worked as a crop inspector and eventually as a crop adjustor.

She is survived by her son, Gale, of Clear Lake; grandchildren, Alli Vanderpool and David Vanderpool; a great granddaughter, Vivienne Vanderpool; as well as her nieces, and extended family.