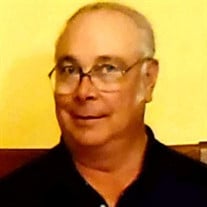 Ronald Warren, age 74 of Humboldt, passed away on Sunday, June 26 at the Humboldt County Memorial Hospital. Funeral services will be 11:00 AM Friday, July 1, 2022 at the Faith United Methodist Church in Gilmore City with Rev. Leila Disburg officiating. Visitation will be 5:00-7:00 PM on Thursday at Lentz Funeral Home in Gilmore City.

Ronald Eugene Warren was born to Carl and Irene (Kleppe) Warren on March 18, 1948 in Iowa City, Iowa. When he was 1 year old Carl and Irene divorced and Irene came to Bradgate, Iowa to work as a housekeeper. She worked in several homes ending up with the Harold Hemerson family where she met her new husband, Russell. Ron was raised in the Bradgate Methodist Church where he participated in MYF, summer camp in Okoboji, and other programs. He attended school in Bradgate until 1959 when the Gilmore City and Bradgate schools consolidated to become Gilmore City-Bradgate. 1959 was the new beginning for him as there was this pretty girl named Phyllis Telfer from Gilmore City that entered his life. Ron was very active in high school sports, band and chorus, and was the school photographer for the yearbook. After they graduated from GC-B, Ron went into the Army to serve three years in the signal corps, and Phyllis went off to college. Upon returning home he and Phyllis were married September 27, 1969. March 3, 1970 Ron joined Northwestern Bell Telephone Company where he worked for nearly 32 years retiring in 2001.

Ron’s telephone career started in Ames as a lineman then to Clarion for five years as a central office tech. Ron and Phyllis were joined in Clarion by the birth of their two daughters Melissa (1971) and Andrea (1973). After the closing of the Clarion office in 1975 they moved to Webster City for two years where Ron worked as a PBX installer. In 1977 they moved to Gilmore City to be close to Grandparents and to put the kids in the small school they had attended. John joined the family in December of 1977. In 1980 they moved to Bradgate where they lived for 34 years in the same home that his mother had worked when she came to Bradgate. In 2014 due to Ron’s health concerns they moved to Humboldt.

Ron was very active in the school district, running for the GC-B School Board in 1978 where he served for 13 years. In 1991 he decided to run for the Iowa House of Representatives but was not successful. He always said though, that it was a very valuable and interesting process and was very glad to have had that opportunity. He was asked to run again for the school board in 2006. In total, he served on the GC-B school board for 20 years.

Ron spent many years leading various United Methodist youth groups for both the Bradgate and Gilmore City United Methodist Churches. During that time he lead the youth on many service projects including ones to Heifer International and Habitat for Humanity. Many of the youth in those groups still fondly remember their experiences.

Ron was also very active in the community, serving on the Bradgate Centennial committee, Bradgate Fire Department, Telephone Pioneers, Humboldt County Farm Bureau (serving as president for two years), and various other committees. His passion was working with the Board of Supervisors and the River Restoration Committee to have work done on the Rutland dam to make it operational and used for flood control. He also worked with Iowa Trees Forever to do a demonstration site for stream bank restoration on the West Branch of the Des Moines River on his farm. He was also instrumental in the establishment of the Farm Bureau Safety Day Camp for all 3rd graders in Humboldt county.

Ron was very interested in wildlife restoration and planted over 40,000 trees and shrubs plus several grass strips for erosion control. The family enjoyed watching the wildlife right outside their windows. In 2017 Ron and Phyllis were awarded the “Conservation Farmer of the year award” from the NRCS for the many practices they had implemented on their farm.

Ron was also active in farming for more than 35 years. He often commented that his tractor had saved many lives. If he had a bad day at work he could come home and take out his frustrations with the tractor and disk out in the field.

Ron never attended college but after today’s service he will start that new journey. It is not to the Red and Gold that he loved but to the Black and Gold. He has requested that his body be donated to the University of Iowa for study. Ron suffered from Wegener’s disease the last part of his life and vowed that if he could help anyone so they did not have to go through what he had then it would be worth it even if it meant going to the University of Iowa.