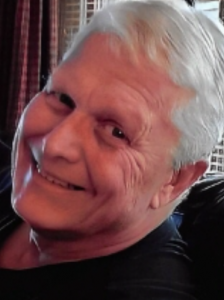 Visitation will be held from 5 to 7 p.m. Monday, November 8, 2021, at the First United Methodist Church.

A memorial service will be held at 10:30 a.m. on Tuesday, November 9, 2021, at the First United Methodist Church, 119 S Georgia, with Pastor Carol Kress officiating. Services will be livestreamed on the Major Erickson Funeral Home Facebook Page.

Inurnment will be held in the Elmwood-St. Joseph Cemetery.

Memorials may be directed to the family of Jon Lohrbach.

Per Jon’s request, his wish was for those attending his memorial service to wear “fun socks”.

His family will never forget his infectious smile and bright blue eyes. “He fought the good fight, until the Good Lord called him home. “

Jon Robert Lohrbach was born on July 26, 1951, to parents Robert and Betty (Claypool) Lohrbach in Hampton, Iowa. He was the oldest son of eight children.

Jon graduated from Sheffield-Chapin High School in 1969, with the nickname “Smiley”. During this time he played football, threw shot put and enjoyed racing his brand new ‘69 Super Bee.

After graduation he entered the Navy during the Vietnam War, where he saw a lot of the world on the Destroyers USS Joseph K. Taussig and the USS William R. Rush.

During the summer of ‘69, when home on leave he met his future wife, Coleen Cooper. They married October 19, 1974 and shared many wonderful memories in their 47 years together. Four years later, he was the proudest Dad, when they welcomed the birth of their daughter Megann.

Jon retired from Mercy One North Iowa as Manager of Engineering after 39 years of service. One of his greatest accomplishments was seeing the Energy Center completed.

Jon enjoyed teaching Boiler Certification classes at NIACC, Iowa State and other Iowa Community Colleges for many years. He served throughout the years as President and on other committees with the Mason City Evening Lions Club and the Iowa Association of Building Maintenance Engineers. He was also an active member of his church by serving on multiple boards and committees.

Jon enjoyed traveling and camping with his family, spending many vacations in the mountains or along a lake shore. His life long passion of fishing started at an early age with yearly trips to Leech Lake as he was growing up. He was often fishing Clear Lake, Okoboji, Leech Lake and Lake Michigan for walleye, perch and salmon. He always enjoyed having a Big ‘Ol fish fry! Many life long friends were made at the Timber Doodle Lodge where he had been going for nearly 20 years.

He enjoyed photography in his earlier years, muscle cars, listening to music, going to tractor pulls, Hawkeye football, going for rides around the lake and most recently relaxing at McIntosh Woods State Park watching all the boats get on and off the water.

Another great joy in his life was spending time with his daughter Megann and his son-in-law Blayne. Jon always felt it was an added bonus when Blayne joined the family. Together the two of them shared many of the same interests. He enjoyed spending as much time in the country as he could at their home, having long conversations where their animals loved being by his side.

Jon was preceded in death by his parents Robert and Betty Lohrbach, one brother Jamie Lohrbach, Uncle Richard Claypool and many loved ones.