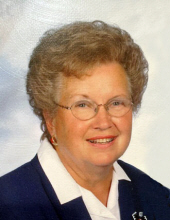 Visitation will be held from 5 to 7 p.m., Tuesday at Cataldo Funeral Chapel, 160 E. 4th St., Garner and will resume one hour prior to services at the church.

Memorials may be directed to St. Paul Lutheran Church.

Darlene Martha Wood, the daughter of George and Edna (Hoeft) Knopf, was born December 23, 1936 at Fort Dodge Methodist Hospital along with her twin sister, Arlene. The girls were immediately baptized in the hospital room weighing in at five pounds. They were tangled up at birth and doctors were concerned for their survival. The family lived in Lu Verne for the first three years of her life and then moved to a farm north of Ventura. Darlene attended St. John’s Parochial School east of Garner until the fifth grade and graduated from Ventura High School in 1955. During her senior year in high school, she met a handsome lad from Clear Lake, Ellery Wood. On April 8, 1956 they were married at Redeemer Lutheran Church in Ventura. They lived on a farm north of Clear Lake for several years before moving to Osage. In 1970 they moved to Garner where they raised their three sons, Douglas Ellery, Dale Edwin and Timothy Ray. During her time in Osage a friend taught Darlene the art of cake decorating which she enjoyed for over 30 years. Many people have also enjoyed her craft over the years for weddings, graduations and most any celebration worthy of a secret ingredient, beautifully decorated tiered and sheet cake. Darlene was employed at the Sport Bowl in Garner, Garner Bakery and Bill’s Family Foods as the “sample supervisor” of foods offered at the store. In addition, Darlene was known as the “Ding Dong Lady” selling Avon out of her home.

She was a member of St. Paul Lutheran Church and St. Paul LWML. She belonged to a couple’s bowling league, golf league and three card clubs which brought her much enjoyment throughout her life.

She was preceded in death by her parents; and twin sister, Arlene of April 15, 2021 just months apart. Darlene would like to be remembered as “a busy lady-loves people-and helps support family, friend and neighbors.”