This news story was published on September 9, 2021.
Advertise on NIT • Subscribe to NIT

During the months of July and August, DNR officials noticed an uptick in the number of illegal fires being set in parking lots, fields, and woodlands located within the 14,000-acre Hawkeye Wildlife Area. The fires damaged trees, fields, and parking lot posts and destroyed multiple hay bales owned by a farmer leasing a portion of the state land.

As a result of the investigation, DNR conservation officers, along with the Iowa Department of Criminal Investigation and the Iowa State Patrol executed a search warrant at Goltz’s residence in Williamsburg. There, officers seized electronics, evidence relating to the fires, as well as methamphetamine and drug paraphernalia.

In 2019, Goltz led an Iowa conservation officer in a vehicle pursuit at the Hawkeye Wildlife Area. During the chase, Goltz left his vehicle and fled on foot into flood waters of the Iowa River where he climbed a tree. A lengthy rescue effort by Iowa DNR officers, the Johnson County Sheriff’s Department, the Iowa State Patrol and local fire departments to remove Goltz from the tree. Goltz was charged and convicted of eluding, carrying weapons, and possession of methamphetamine. 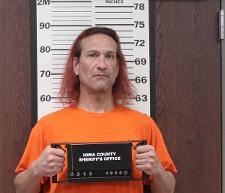