This news story was published on September 7, 2021.
Advertise on NIT • Subscribe to NIT 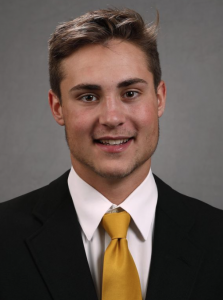 IOWA CITY – University of Iowa senior defensive back Riley Moss has been named the Big Ten Defensive Player of the Week, following No. 18 Iowa’s 34-6 win over No. 17 Indiana Saturday. The announcement was made Monday by the Big Ten Conference office.

Moss on Sunday was named the Walter Camp national Defensive Player of the Week.

Moss (6-foot-1, 194-pounds) earns his first Big Ten Player of the Week Honor. He was previously named Big Ten Freshman of the Week following Iowa’s win at Minnesota in 2018, when he also collected two interceptions.

Moss became just the third player in school history to return two interceptions for touchdowns in a single game. He had a 30-yard interception return to give Iowa a 14-0 advantage in the opening minutes of the game. Moss collected his second touchdown in the final minutes of the second quarter, returning the theft 55 yards for the score.

Moss added one solo tackle and two pass break-ups against the Hoosiers as the Hawkeye defense allowed just 233 yards total offense. Moss has three career interceptions returned for touchdowns, adding to his 54-yard touchdown in Iowa’s 49-7 win over Michigan State a year ago.

Moss has eight career interceptions for 239 yards. The eight thefts tie for 19th in program history, while his 239 return yards rank second among Iowa’s career leaders (Tyler Sash, 392 yards). The three touchdowns tie Desmond King and Tom Knight for the most in school history.