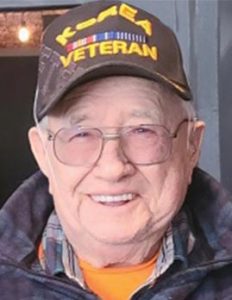 Funeral Mass will be held 10:30 a.m. Friday, June 4, 2021, at Sacred Heart Catholic Church in Osage, with Father Raymond Burkle officiating. Burial will be in Sacred Heart Cemetery in Osage with military honors by Osage VFW Post 7920. Visitation will be from 5:00 to 7:00 p.m. Thursday at the Church.

Kenny was born April 29, 1930, in Colwell, the son of Burl and Lillian (Wagner) Goodale. He graduated from Little Cedar High School. Kenny served his country in the United States Army during the Korean War. He married Ruby Boggess on June 27, 1953, in Ionia, Iowa. They farmed in the Osage area, moving to Osage in 1984. Kenny sold tools when moved to Osage. He was a member of Sacred Heart Catholic Church, Knights of Columbus and VFW Post 7920 in Osage. Kenny enjoyed fishing, playing cards, going to casinos, watching the Minnesota Twins, attending wrestling meets and visiting with the customers at Piggyback and Taste. Most of all he loved spending time with his family and friends.