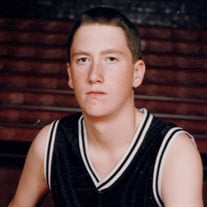 A private family graveside service will be held in Buffalo Township Cemetery near Titonka, where Gordon will be laid to rest.

Gordon David Seehawer was born July 20, 1980 in Mason City, the son of Linda Seehawer. Growing up in Mason City, Gordon attended Mason City High School, graduating in 1999. When his mother passed away in 1995, Gordon’s extended family became his foundation. Growing up with his cousin and time spent with his grandmother, Arlene, were treasured memories.

Gordon was a happy go lucky guy who carried a contagious smile. He was always willing to give a helping hand or take the time to help someone. Gordon was a HUGE Minnesota Twins, Greenbay Packers, and Iowa Hawkeyes fan, and rarely turned down an opportunity to cheer them on. He was a longtime member of St. James Lutheran Church.

Those left to cherish his memory are his grandmother, Arlene Seehawer of Mason City; siblings, Scott Seehawer and Amy Brouillard; an aunt, Lori (Jay) Hain of Mason City; a cousin, James (Brittany) Estle and their family, Aliza and Owen; as well as extended family members.

Those greeting him at the gates of Heaven are his mother, Linda; grandfather, Garfield Seehawer; and an uncle, Bob Estle.