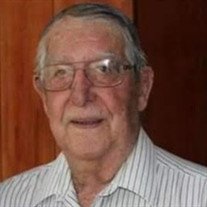 Per his wishes his body has been cremated and the family will have a celebration of his life at a later date.

Dean was born on November 23, 1930, the son of William and Ida (Baldner) Hoffman of Toeterville, IA. He went to Union Township Country School until the eight grade, later graduating from St. Ansgar High School. On October 15,1950, Dean married the love of his life Helen Hoff, from this union four children were born. He was a farmer his whole life up until his retirement in the late 90s. After retiring Dean and Helen became fond of antique dealing and it’s something they did until their health no longer allowed them.

His hobbies included woodworking, Dean even built the beautiful house they lived in for countless years. Antique toys, especially tractors were something that Dean would collect but also often fix. Family was the most important thing in Dean’s life, being a great father and grandfather.

Dean is preceded in death by his wife of 70 years, Helen; his daughter, Anita DeBoer; all siblings as well as his parents.