CEDAR FALLS – A tough battle of three-pointers and free throws left the Panthers behind the Braves on Monday night, 75-73. The Panthers fell short at the end when Trae Berhow’s put-back fell seconds late.

The Panthers and the Braves traded the lead throughout the game, exchanging 12 lead changes within the first half alone. In the first 14 minutes of the game, Berhow and Bowen Born knocked down back-to-back threes giving the Panthers the early two-point lead.

At the eight-minute mark, the Panthers led the game, 18-17, but the Braves’ momentum was only beginning. The Braves wouldn’t let the Panthers see more than a three-point lead until after halftime.

With 11:00 left in the second half, the game started to resemble a three-point contest. Berhow and Bradley’s Reink Mast along with freshman Nate Heise hit threes within 40 seconds of each other. Carter added two from behind the arc and Berhow added another before the game ended.

Free throws allowed the Panthers to continue to threaten the Braves as the MVC rival shot 61.5% (8-13) from the line in the second half.

In the final moments, Born was sent to the line and made one, the freshman guard rebounded his miss with a three-point shot for the win. The final shot bounced off the rim with Berhow making the put-back just moments too late.

Born recorded a new career-high led the Panthers tonight with 17 points and Berhow recorded 15. Cole Henry would set his career-high with five assists while Austin Phyfe recorded a team-high 11 rebounds.

THE BRAVES
Elijah Childs and Ja’Shon Henry led the Braves with 16 points
Childs hauled in a team-high 8 rebounds
Bradley held the lead for 17:10
Bradley scored 22 points off turnovers
The Braves scored 34 points in the paint 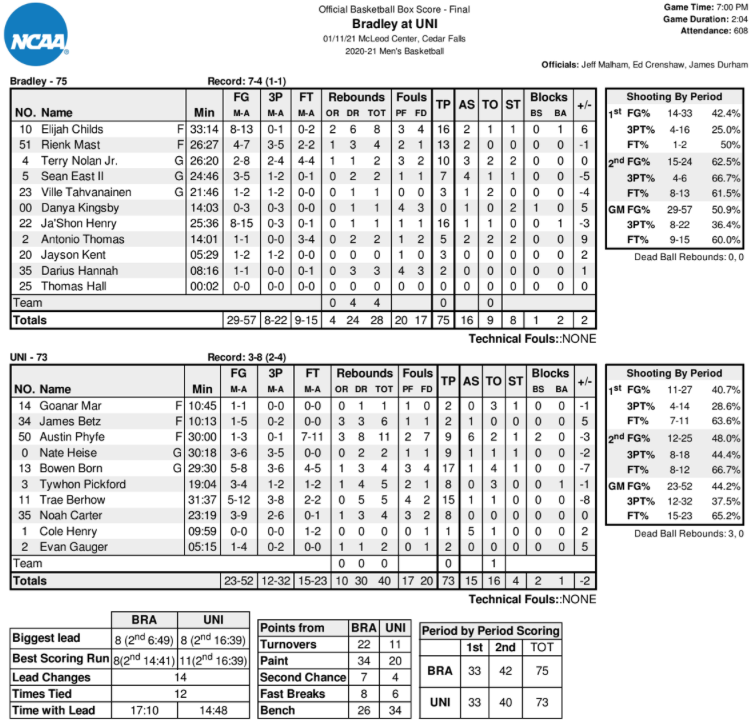