This news story was published on December 18, 2020.
Advertise on NIT • Subscribe to NIT 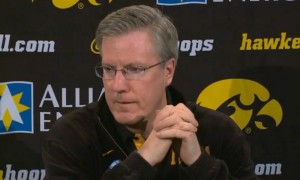 IOWA CITY – The Iowa Hawkeyes, ranked #3 in the nation, is preparing to face top-ranked Gonzaga Saturday in South Dakota.

Ayayi is really good and Kispert can really shoot it. They have so many good players. They’re veteran guys. They lose nothing when they go to the bench. They share it. They play it fast. They move it. There’s a reason why they’re ranked number one.

COACH MCCAFFERY: Well, he runs. He’s like a guard. He’s 6’10”. But he handles the ball really well. He moves in the post. He makes moves from the perimeter. He’s really good at creating angles. And he passes the ball to his teammates. So those guys are a handful.

COACH MCCAFFERY: Any time you have an opportunity to play a program like that is terrific. You look at the remainder of our schedule, 20 league games after this, but we took care of business in the first six. You have an opportunity on a national stage to play the No. 1 ranked team. A team that has pretty much been up there last decade says a lot about who they have, their coach, Mark Few, their coaching staff.

When you make a decision to play college basketball, you hope for opportunities like this on this kind of stage. And that’s what we have. So I’m happy for the guys. And I think they’re mature and smart enough to recognize the challenge before us.

COACH MCCAFFERY: I think the important thing for him is he’s good on the block but he’s not just strictly a low-post player. I think you’re right. In the post, he’s seen it all.

COACH MCCAFFERY: I think as normal as it can be. It’s still not normal. The buildings are empty. And we haven’t played a road game yet or neutral game yet. So I do think the veteran nature of our team has enabled us to be mature enough in what we do off the floor and stay connected and stay together in practice and on the floor because we all want to play. Those kids want to play.

They want opportunities to play North Carolina, Iowa State, Gonzaga. They want those opportunities. And I always say that’s what they sign up for when they come here.

COACH MCCAFFERY: I don’t think they’re really thinking about it or paying much attention to it. That’s the way the games are going to be this year. Maybe later in the season that will change. But right now it’s kind of what we’re expecting. It’s what we’ve experienced. Same thing for everybody we play. So I don’t think they’re thinking much of it. Just getting ready to play a great team and try to do the best we can.

COACH MCCAFFERY: You know, he would have been a lottery pick last year if he could have come out of high school. So it’s a complete skill set, Mike, that’s what it is. He can penetrate, get in the lane, find his teammates. He can play fast, play slow. He defends and he rebounds and can shoot it.

He’s really special at delivering the ball at the absolute perfect time, which is a gift. Very much like Jason Kidd, when I saw him in high school.

If you throw it one second later, one second earlier, it’s a turnover. And when those guys throw it it’s an assist. So you really have to be locked in when he has the ball.

COACH MCCAFFERY: Great arena. Deal with very professional people when you’re looking at scheduling. And, when you play a game in Sioux Falls, you deal with Paul Seville. Straight-up guy. Really good folks up there. The atmosphere, if it were different, would be nuts. We all prefer that like we said. But, still, it will be an arena that looks really good on national television and two great teams competing. And we’re looking forward to it.

COACH MCCAFFERY: I don’t really think that matters at all, to be honest with you. We’re all used to going to different venues. Both teams are veteran clubs. We have a few guys who played up there. I think Luka, Connor, and Jack’s freshmen year and Jordan’s sophomore season. But it’s not that big a deal.

COACH MCCAFFERY: The thing I liked about him is he can run it when Suggs is out. But they play well together. He can move off the ball and make plays, make shots. Played in the SEC. Was incredibly successful. Again, it’s just a veteran guy that doesn’t rattle, makes plays, makes the play that’s there. Really talented guy.