This news story was published on December 3, 2020.
Advertise on NIT • Subscribe to NIT

FARGO, N.D. – North Dakota State went on a 10-0 run to take a 20-8 lead in the first quarter and never looked back en route to an 85-68 win over UNI Wednesday at the Scheels Center in Fargo.

Four Panther players scored in double figures, but North Dakota State hit 52.6% (30-57) from the field to in an impressive offensive performance.

UNI outrebounded NDSU 36-35 and tallied six blocks as a team, but the Bison outscored UNI 42-32 in the paint and had 15 assists on 30 made baskets.

Nicole Kroeger led UNI with 13 points. Emerson Green came off the bench to score 12 and Karli Rucker and Kam Finley added 11 each.

Rucker tallied six rebounds and four assists on the game.

UNI is now 1-2 on the season and are back in action Sunday on the road against Wichita State at 5 p.m. The game will be carried live on ESPN+.

Karli Rucker moved to 18th on the UNI All-Time scoring list. She passed Cassie Hagar and now has 1,065 career points. She is now 17 points away from Jen Keitel for the 17th all-time spot on the list.

Emerson Green continues to impress early in her freshman year. She has scored 31 points in three games, good enough for fourth on the squad with a 10.3 average.

Four Panthers are averaging double figures after three games. Kam Finley leads UNI with 14.0 points per game (She scored 22 in the season opener at Iowa) Karli Rucker is scoring 11.3 PPG and Megan Maahs 10.7 PPG.
Cynthia Wolf added another block to her season total, she now has six on the year. Bre Gunnels and Sara McCullough tallied two blocks each Wednesday.
The game was the first road loss in the series. UNI was 3-0 in Fargo previously. 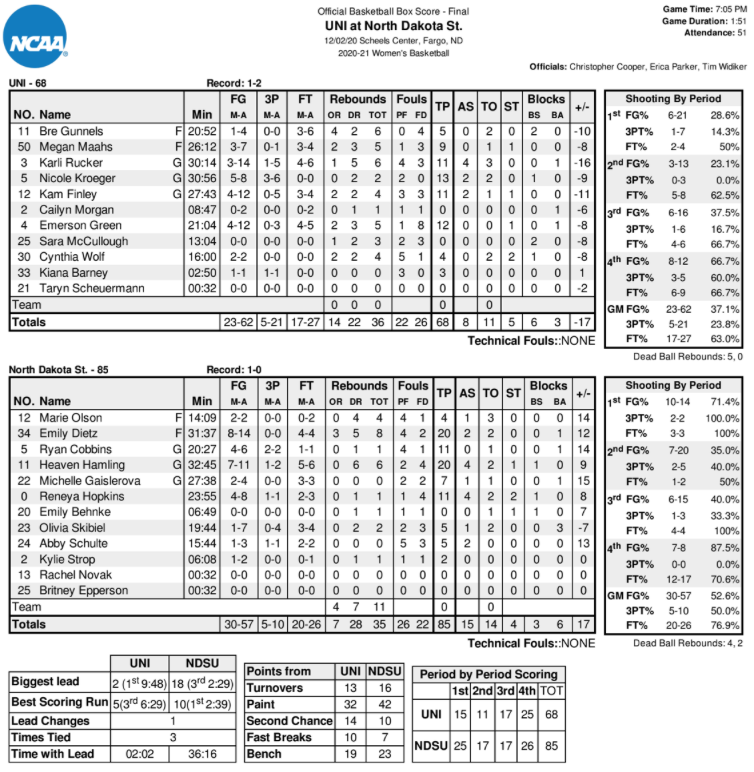