BUCHANAN COUNTY – A meth-fueled Iowa crook has been sent to prison for up to 10 years after a dangerous chase that left a deputy seriously injured.

Kevin Allen Krapfl Jr., 30, of Manchester, Iowa, was sentenced to serve a prison term of 10 years in the Iowa District Court for Buchanan County on September 24, 2020.

The charges against Krapfl arose on April 18, 2020, when a conservation officer attempted to stop the vehicle driven by Krapfl in rural Fayette County following a report that the vehicle had fled the scene of a pedestrian hit-and-run in Oelwein. Krapfl refused to stop and instead accelerated in an attempt to elude the pursuing officer. The pursuit continued through rural portions of Fayette and Buchanan County with Krapfl going through controlled intersections at speeds in excess of 90 mph.

At the intersection of Buchanan-Delaware Road and 150th Street in rural Buchanan County, Krapfl’s vehicle collided with the patrol vehicle of the first responding backup officer arriving to assist, Buchanan County Sheriff’s Deputy Dan Walter. The collision left Deputy Walter unresponsive and seriously injured. Krapfl, however, exited his vehicle and fled on foot. He was quickly apprehended in a nearby corn field.

In addition to serving 10 years in prison, Krapfl must also pay fines, surcharges and related costs of $4,620 and victim restitution, comply with the recommendations of a substance abuse evaluation, complete a course for drinking drivers, and his driver’s license is revoked for a period of six years. 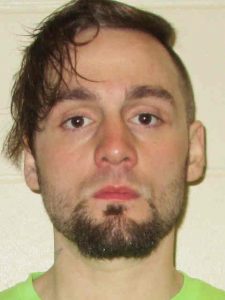