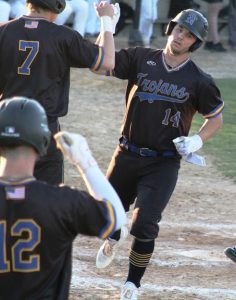 MASON CITY – A total of nine NIACC baseball players will play next season at the NCAA Division I level.

NIACC’s Patrick Pridgen and Tyson Tucker signed their national letters of intent last November. Pridgen is headed to the University of Oregon and Tucker will attend UNC-Charlotte.

Pridgen, a right-handed pitcher, had a career record of 8-4 at NIACC. He is tied for 10th on the school’s career strikeout list with 97 in 87 1/3 innings pitched.

Denton, a catcher, had a career batting average of .295 with nine home runs, nine doubles and 32 RBIs.

Kratz, a right-handed pitcher, accumulated a record of 4-5 with 62 strikeouts in 47 innings pitched.

Cochran, a catcher, had a career batting average of .357 with eight doubles, three home runs and 19 RBIs.

Michael Sturek, a right-handed pitcher, had a career record of 3-2 with five saves. He had a 1.65 earned run average in 27 1/3 innings pitched.