CEDAR FALLS – The UNI women’s basketball jumped opened and closed the game on big runs and picked up a 76-60 Missouri Valley Conference win over Evansville to move to 10-5 on the season and 2-2 in MVC play.

The Panthers opened the game on a 19-2 run and closed the game with a 17-2 streak, in between those two runs, it was back and forth battle.

UNI started the game shooting 5-6 from the three-point line, including three makes in a row from Nicole Kroeger to jump out to the big lead. Evansville cut the advantage to 21-8 at the quarter and 35-27 at the half.

The Panthers outscored Evansville 21-20 in the third quarter, but the Aces rallied in the fourth quarter to cut the lead to 59-58 with 6:30 remaining in the game. The rest of the game was all Panthers and mostly Karli Rucker. She scored 15 of her 28 points in the final 6:06 of the game and UNI pulled away for the 16-point win.

Rucker tied her career high with 28 points. Nicole Kroeger added 14 and Kristina Cavey scored 10 and grabbed a career-high 12 rebounds. Cynthia Wolf had seven rebounds and a career-high seven assists in the win.

NOTES
– Nicole Kroeger hit her first three three-point field goal attempts, helping UNI jump out to a 19-2 lead in the first quarter.
– The Panthers started the game 5-6 from the three-point line (83%), but closed the first half 7-19 from the three-point line (36.8%).
– Karli Rucker tied her career high with 28 points matching her performance against Southern Illinois on March 3, 2019.
– Cynthia Wolf tallied a career-high seven assists, her previous best was four against IUPUI on Dec. 15, 2019, against IUPUI.
– Kristina Cavey recorded a career-high 12 rebounds, her previous best was 10 at Iowa State on Dec. 22.

The Panthers host Indiana State Sunday at 2 p.m. at the McLeod Center. 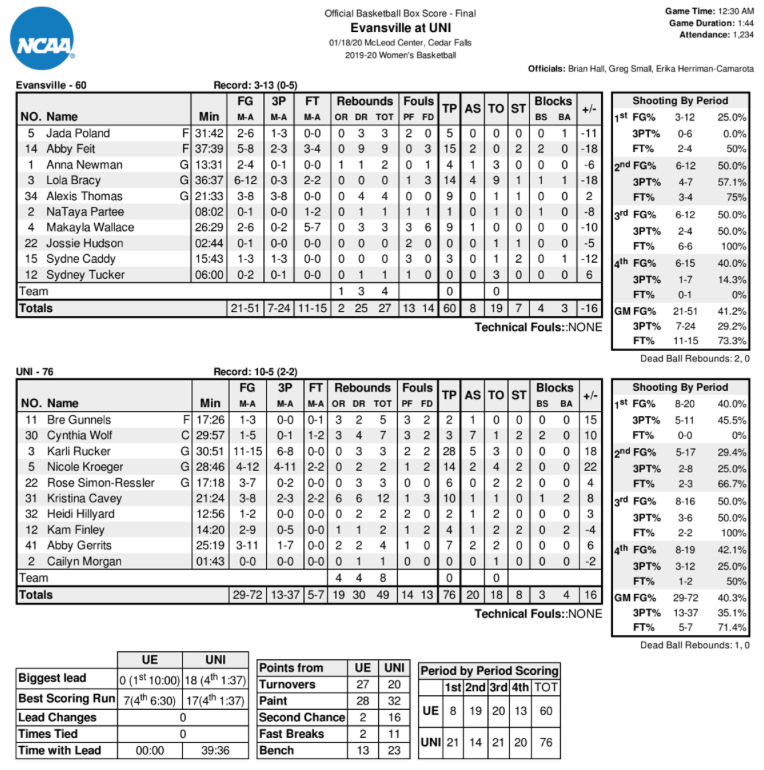