This news story was published on October 7, 2019.
Advertise on NIT • Subscribe to NIT 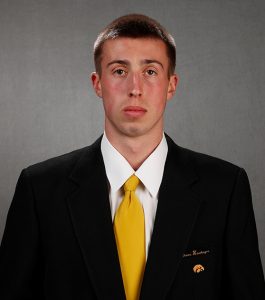 ROSEMONT, Ill. – University of Iowa sophomore Joe Wieskamp is one of 10 men’s basketball players selected to the 2019-20 Preseason All-Big Ten team as selected by a media voting panel. The Big Ten Conference office made the announcement last week.

Wieskamp (6-foot-6, 210 pounds) was named to the five-player All-Big Ten Freshman Team a season ago, leading the team the team and finishing second in the Big Ten in 3-point field goal percentage (.424, 59-of-139). He ranked third on the team in scoring (11.1) and steals (32), and second in rebounding (4.9). The Muscatine, Iowa, native joins Ayo Dosunmu of Illinois and Maryland’s Jalen Smith as the only underclassmen recognized on the 10-player team. Wieskamp is the third Hawkeye in the last five seasons to be named Preseason All-Big Ten (Peter Jok, 2016; Jarrod Uthoff, 2015).

Michigan State’s Cassius Winston was selected as the unanimous Preseason Big Ten Player of the Year.

Iowa will hit the court for the first time Nov. 4, hosting Lindsey Wilson College in an exhibition on Mediacom Court at Carver-Hawkeye Arena at 7 p.m. (CT).

The Fight For Iowa Mobile Season Pass, season tickets, and mini packages are currently available for purchase on hawkeyesports.com/tickets.

Unanimous selections in ALL CAPS