This news story was published on August 17, 2019.
Advertise on NIT • Subscribe to NIT 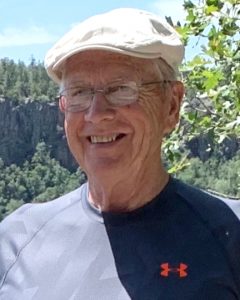 A funeral service for Raymond Reed will be held at 11:00 a.m. on Wednesday, August 21, 2019 at Hauser Funeral Home in Charles City with Pastor Daniel Larson from Cross Lutheran Church officiating. Burial will be at Rose Hill Cemetery in Greene.

Visitation will be from 9:30 a.m. until the start of the service at the funeral home on Wednesday.

Raymond Orville Reed, the son of Orville and Avis (Stanbrough) Reed, was born September 21, 1942 in Greene, Iowa. He was raised in the Greene area and graduated from Greene High School. While in school, Raymond’s nickname was “Aggy” because he loved to collect agates (a love he kept for all of his life and passed to the rest of his family).

Raymond married Jane Cleveland and this union was blessed with two children: Tina and Terry. The couple later divorced.

On April 1, 1969, Raymond was united in marriage to Jacqueline Keating at The Little Brown Church in Nashua. The couple made their home in Belvidere, Illinois before moving to Zion, Illinois, Waverly, Iowa and finally to the farm west of Nashua where they have resided for the past 43 years.

Raymond worked several jobs throughout his career including Sundstrand Corporation in Belvidere, manager of a country store in Zion, about 30 years at Bantam/Koehring/Terex Cranes in Waverly and ran a night crawler business with his children for four years called Crawler World.

Raymond was a member of the Iowa Trappers Association where he served as Past President in 1976 and the Nashua Music Parents organization through the Nashua schools. He enjoyed trapping (raccoon, fox, muskrats and mink), fishing, rock collecting, playing the stock market and attending garage sales. Raymond loved spending time with family and friends, especially his grandchildren.

Raymond was preceded in death by his parents; son, Daniel “Dan” Reed on August 13, 2018; and infant daughter, Tina Marie.