This news story was published on April 16, 2019.
Advertise on NIT • Subscribe to NIT 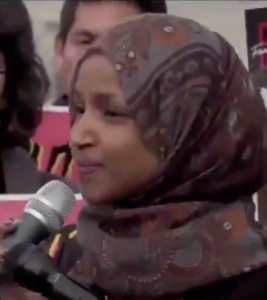 MINNEAPOLIS – Minnesota Representative Ilhan Omar said this weekend she was threatened by a Trump tweet as she raised $830,000 for her re-election.

“Since the President’s tweet Friday evening, I have experienced an increase in direct threats on my life—many directly referencing or replying to the President’s video. I thank the Capitol Police, the FBI, the House Sergeant at Arms, and the Speaker of the House for their attention to these threats. “Violent crimes and other acts of hate by right-wing extremists and white nationalists are on the rise in this country and around the world. We can no longer ignore that they are being encouraged by the occupant of the highest office in the land. Counties that hosted a 2016 Trump rally saw a 226 percent increase in hate crimes in the months following the rally. And assaults increase when cities host Trump rallies. This is particularly concerning given the president’s visit to my home state of Minnesota on Monday. “Violent rhetoric and all forms of hate speech have no place in our society, much less from our country’s Commander in Chief. “We are all Americans. This is endangering lives. It has to stop.”

President Trump had tweeted a video of Omar saying “some people … did something” in reference to the horrific attacks of September 11, 2001.  The tweet also featured a video of the jets crashing into the Twin Towers in New York City.  Her remarks were controversial only in that they are taken in different context depending on who hears them; many Americans felt her description of the terror attack that day was dismissive and disrespectful while others took no issue. The tweet is below.

Meanwhile, the Star-Tribune reported today that Omar had raised approximately $830,00 for her re-election campaign.

WE WILL NEVER FORGET! pic.twitter.com/VxrGFRFeJM