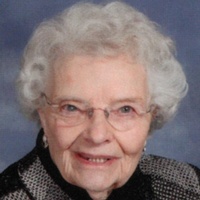 A Funeral Mass will be held at 11:00 a.m., Tuesday, November 27, 2018, at St. Peter’s Catholic Church in New Haven with Father Jerry Kopacek officiating. Inurnment will be at a later date in St. Peter’s Catholic Cemetery in New Haven. Visitation with the body present will be from 5:00 to 7:00 p.m. Monday at the Champion-Bucheit Funeral Home in Osage.

JoAnne was born January 14, 1928, in Riceville, the daughter of Lester and Vera Lucile (Hubbard) Yager. She attended school in Riceville and graduated from Riceville High School in 1945, later she attended and graduated from NIACC in 1990. JoAnne was united in marriage to Erwin Byrnes on June 22, 1946, at St. Peter’s Catholic Church in New Haven. She worked various jobs, which included being a telephone operator, working ten years at the Mitchell County Hospital, at Shaklee Sales and throughout it all she helped with the farming and taking care of her family. JoAnne was a member of St. Peter’s Catholic Church, Altar Society and Church Choir, an auxiliary volunteer at the Mitchell County Hospital and a member of the American Legion Auxiliary. Her hobbies and interests included, golfing, cooking, skiing, reading, traveling and knitting.

She was preceded in death by her parents; husband, Erwin; her children, Jonathon, Jason, Molly and Robert; and one brother, Keith Yager.