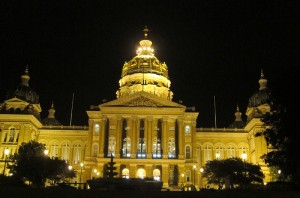 DES MOINES – The following information is from Iowa Democrats:

Home Foreclosure Timelines Could Be Shortened

Proponents of the shortening of the time believe that the current process is too long and federal law already has time period requirements. Current federal law requires a minimum 120 day waiting period on homes being foreclosed on. The changes proposed in the legislation would essentially move the time periods back to before the law was passed on a federal level.

Opponents of the change argue that those facing foreclosure could be in the situation in various situations and should be given every opportunity to stay in their home.

The legislation now heads to the Iowa House floor to be considered by the entire Iowa House of Representatives.

Water quality in some of Iowa’s streams has improved because of local water quality efforts. Buffalo Creek in Northeast Iowa had stream segments listed as impaired waters since 2008. The streams, which did not meet state water quality standards, were on the impaired water list because aquatic life, specifically mussels, could not be supported in the streams. Those five stream segments were removed from the impaired waters list this year when the DNR found a significant increase in the number of mussels in the stream, including four mussels that are on the state’s threatened species list.

The improvement in water quality came because of the local efforts of the Upper Buffalo Water Quality Project, spearheaded by the Buchanan Soil and Water Conservation District. Landowners and farmers were encouraged to create grassed waterways and filter strips and improved farming practices that led to significantly reduced sediment reaching the creek. The reduced sediments led to improved habitat and a return of mussels to the water.

The water quality improvements were discovered as part of the DNR’s statewide freshwater mussel survey. The DNR sampled over 813 sites over seven years statewide as part of the mussel survey. The department found 39 different species across the state, including two that were thought to be extinct from the state. Because of the survey, 12 stream segments across the state were delisted from the impaired waterways list and another two will be proposed for delisting.

School Districts Could be Allowed to Share Social Worker Positions

A bill has passed the House Education Committee that would add social workers to the list of positions that could be shared. Through the state incentive, a school district could receive weighting of three pupils under the school aid formula.

Considering the urgency of mental health issues, it could make a big difference for a school district to have a social worker. Such a position could help students cope with mental health issues including suicide and possible violent actions that would threaten the safety of themselves or others.

A separate bill has already passed the House and is being considered by the Senate that would extend the entire operational sharing program. Currently the program would be eliminated without legislative action at the end in 2019.

On Monday, February 12, the Iowa Supreme Court will hold a special evening session in Des Moines as a part of their “Court on the Road” series where they hold sessions in the community. The sessions provide the public, and specifically schools, and opportunity to watch oral arguments presented to the Supreme Court. The evening session will begin at 7pm in the Judicial Branch Building, 111 East Court Ave, in Des Moines. After the session, the Supreme Court Justices will host a public reception.

The Supreme Court first began holding “Court on the Road” in 2011, and every year they work in an evening session in Des Moines in the month of February. In consultation with these sessions, the Justices take the opportunity to visit multiple schools in the area. Since 2011, they have visited 26 communities and 170 schools.

Persons who are interested but can’t make it to witness Monday’s oral arguments can view the live stream on the Iowa Judicial Branch YouTube channel, https://www.youtube.com/channel/UCL6EU7W8kqDKnKPUzMdxr_g. The streaming will begin at 6:50pm.

The latest Condition of Iowa’s Education Report (2017) has been released by the Department of Education. It gives a snapshot as to how Iowa is doing in key areas of enrollment, student achievement, staff and items such as early childhood. When it comes to teacher student ratios, teacher salaries and student achievement, the House leadership plan of minimal growth in school funding, has yielded predictable results.

The latest report shows that last year, the total number of teachers in Iowa increased by 396 compared to two years ago. That is just over one teacher more per Iowa’s 333 school districts, and many school districts, particularly in rural areas, have reduced teachers and increased class sizes. (See link to the report below on the number of teachers, (Pages vii, 26 and 27).