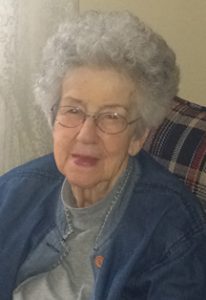 Gwen Schmidt went to be with the Lord November 13, 2017 at the age of 95.
Visitation will be held on Wednesday, November 15, 2017 from 5:00 to 7:00 p.m. at Hauser Funeral Home in Charles City, IA. A celebration of life will be held on Thursday, November 16, 2017 at 10:30 a.m. at Hauser Funeral Home with a luncheon to follow at The Bridge church in Charles City. Burial will be at Flood Creek Cemetery near Rockford, Iowa.

Gwendolyn Jean (Wentworth) Schmidt was born on February 9, 1922 in Spirit Lake, Idaho. At the age of five, her parents (James and Martha (Frink) Wentworth) moved back to their hometown of Cedar Rapids, Iowa. During World War II she worked at a dental office in Cedar Rapids. She met her husband, Robert Schmidt, after writing to him at the end of the war at the request of a couple mutual friends and family members. Bob and Gwen married in Cedar Rapids on November 13, 1948. Monday marked their 69th anniversary. Once married, they lived in Charles City before settling outside of Rockford, Iowa on a farm. It was there that they raised two children, Jeanne (Schmidt) Regier and Mark Schmidt. Through the years Gwen also worked at the Rockford School in the cafeteria.

Gwen was very active in retirement serving with the Pink Ladies, Hospice, and was a beloved Foster Grandparent in the Charles City Schools. Gwen and Bob took many trips to Texas to visit their daughter and grandkids as well as bus trips in the United States. Gwen loved to knit, created beautiful ceramic art, enjoyed tea parties with her granddaughters, and was competitive in games with her family and could debate with the best!
Gwen was preceded in death by her parents James and Martha (Frink) Wentworth and her sister Virginia (Wentworth) Linkenbach.

Throughout her life, Gwen loved the Lord and her greatest desire was to see those around her have the same loving relationship with her heavenly father and best friend in life.