No attempted child abduction in Greene, but kids were frightened by people in a van

GREENE, IOWA – An alleged child abduction reported Thursday in the Butler county town of Greene never took place, police say, but children were frightened by people inside a van, and charges are pending.

Butler County Sheriff Jason Johnson says Friday that at around 8:42 PM Thursday night, the Butler County Sheriff’s Office received a report of an attempted abduction of 2 young boys (ages 10 and 8) from the parking lot of the Bridgeway Convenience Store in Greene. The incident was investigated by Butler County Deputies and all involved parties have been identified and are local to the Greene area, including an eye witness to the event.

The findings of the investigation are that there was no attempted abduction.
One of the suspects did intentionally yell at and scare the boys, which was verified by eye witness account.

Sheriff Johnson says charges are pending in the incident.

However, according to Niki Carlson of Clarksville, Iowa:

“According to the Butler County Sheriff Dept, this was not an attempted abduction. The van and people inside have been located. A man, Chris Zweck, admitted to sitting the van and opening the sliding door and yelling at my kids to scare them. He denies touching either of them in any way. He does admit to scaring my children intentionally. He also admits to making grabbing gestures towards them. To be clear, my kids do not know this man. He is a stranger. They both insist he grabbed my son’s shirt.
What kind of an adult sits in the back of a van and waits to scare two little boys who were getting a loaf of bread for their Granny (my mom)? My mom lives less than a block from the store. This man intentionally scared them, they were afraid for their lives. Since they were little they’ve have been taught to stick together and to run. And they did, thank God.
I am so thankful my kids are safe and knew the right thing to do. I am repulsed that a grown man has little else to do with his time than to scare little boys. I do not care what anyone’s intentions were, my kids were afraid. HOW DARE this person cause my kids to be afraid in a town they’ve grown up in? HOW DARE some adult who should be helping our so called village cause such fear in an already sick and twisted world?!?!! Little boys can’t go a block to the local store and get their Grandma bread?!
DO NOT PICK MY CHILDREN.
The Carlsons aren’t well known for their humor or their sense of forgiveness.” 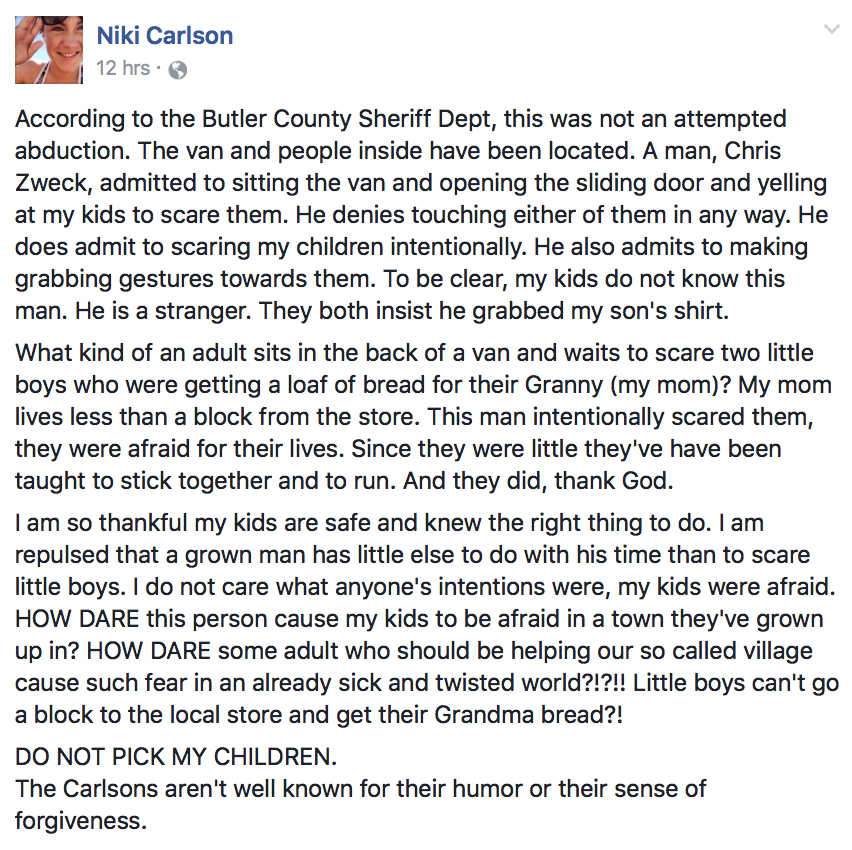 8 Responses to No attempted child abduction in Greene, but kids were frightened by people in a van